For 24 human stool samples I have metagenomic shotgun reads from an Illumina platform. The reads were filtered and mapped against a bacterial species library and specific maps to species were kept and counted. Importantly, before DNA extraction from any sample it was spiked with a solution of a fixed DNA concentration of Thermus thermophilus, a species not occurring in the human microbiota. The reads from T. thermophilus allow me to convert relative abundance estimates back to abundance in the stool sample, to absolute abundance.

I want to test whether T. thermophilus is indeed a good internal control that removes confounding by converting to absolute abundance. To test this, I compare between-species correlations on the relative abundance scale with their correlations on absolute abundance scale. I would expect less correlation in the latter. I first take the raw read counts of a random set of species, I divide counts by a sample-specific size factor estimate (total number of reads r in sample i / geometric mean of r's) to adjust for library size, then I do arcsinh transform (to stabilise variance) and then I look at between species correlation. Next I take again the raw read counts, correct by the size factor, then correct for an estimate of the coverage ( estimated proportion of T. thermophilus in sample i ), and I do the acsinh transform. Again I look at between-species correlations.

I compare species-pair correlation before and after T. thermophilus correction in a scatterplot (see attached) to visualise the effect of the correction. I expected that the point cloud indicates a slope <1 reflecting that previously strong correlations have weakened on the absolute scale. But that is not what my result shows. Indeed, some weakly positive correlations have become stronger. How does this make sense? What other ways are there to test validity of an internal control? 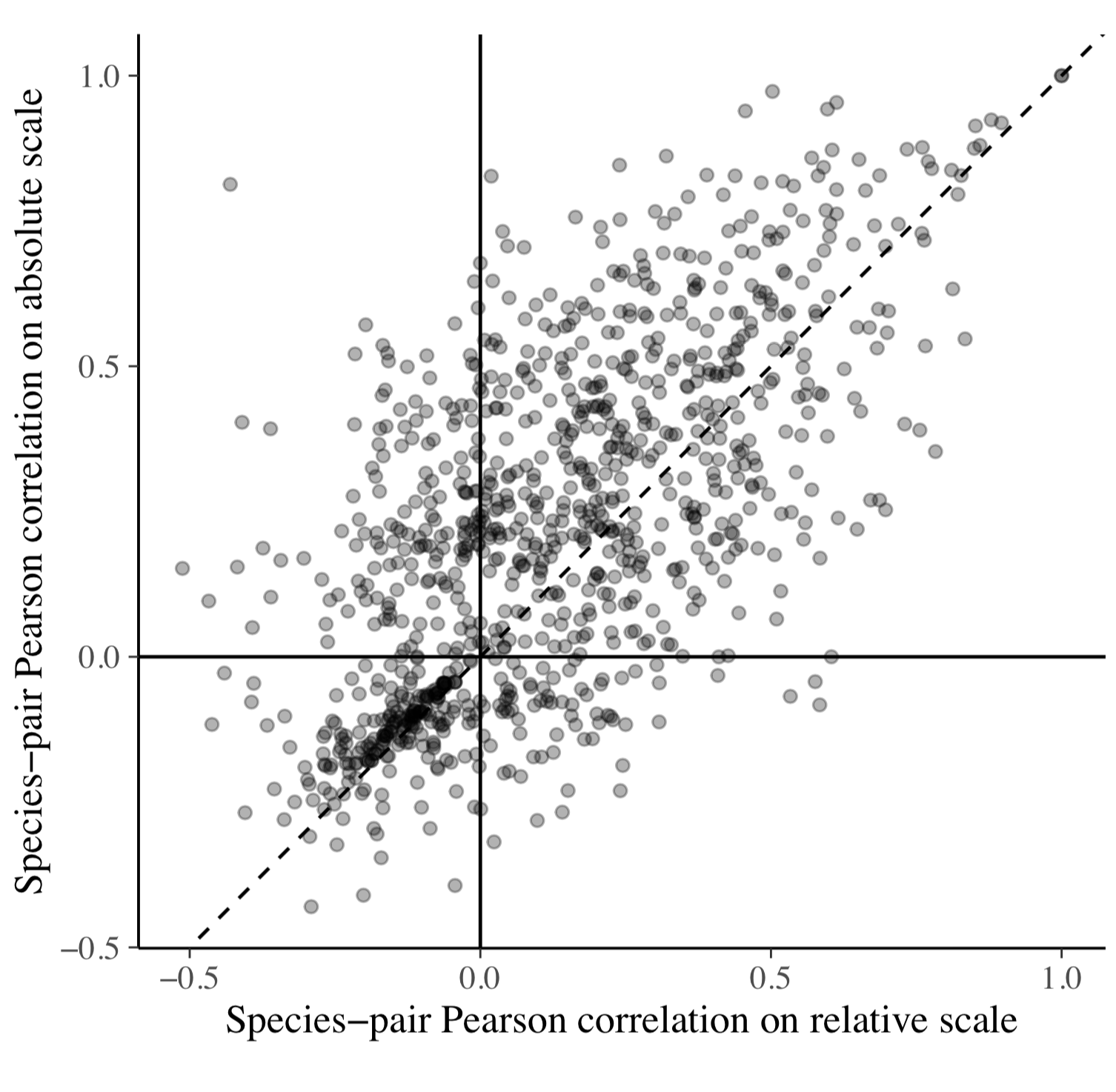 The problem with correlations in relative scale is know on the literature, it has been suggested to change to other metrics. So I wouldn't use it for internal control.

As you can see on figure 3 of the linked article the correlation on the absolute scale tend to be higher. So I would say this is within expectations.

As other way for internal controls are blanks (Just water to see if there are any contaminants), and technical replications, to make sure that the measure is correct not some problem with picking some amplifications instead of others...

Also you don't mention it but the tool and library used to impute the microorganism is also important. You can check with other tools to see if the estimation is similar.

Not the answer you're looking for? Browse other questions tagged quality-control metagenome coverage correlation validation or ask your own question.

1
Accidental mapping of eukaryotic reads in a metagenomic dataset
1
Optimal design for an RNA-seq experiment with ERCC RNA Spike-In Control Mixes
2
Total read count of shotgun affected by few highly abundant sequences
0
NCBI SRA database sample: control vs test
3
Is there any value in scaffolding the output contigs of MEGAHIT assembler given a metagenomic dataset?
0
Shotgun analysis: Where and how to start?