what is the most optimal keyword search query to input into NCBI In order to find all the available proteins accession numbers for a specific family?

For example, how would I find all the reviewed accession numbers for all currently available human ALDP (AdrenoLeukoDystrophy Protein) family of proteins that are in NCBI?

Also, is there a specific database within NCBI that is optimized for my task?

A simple approach is to search for the gene name in NCBI Gene portal but this can miss a few cases and often include genes that are unrelated because the gene symbol is used by other unrelated genes as well.

For a cleaner dataset, you can use the NCBI Orthologs as follows. Search for human ALDP in the NCBI homepage with All Databases selected in the dropdown menu as shown below:

After you click the 'Search' button, you will be directed to a result page that looks like this: 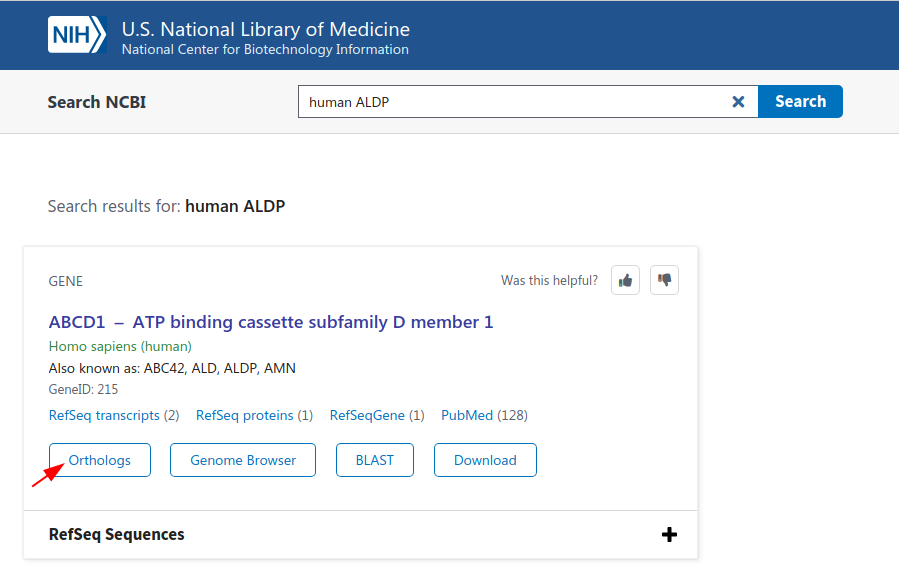 Click on the 'Orthologs' button and you will be directed to a page with the list of proteins that are similar to the one you have started from. Note, these may not be orthologs in the truest sense; see this description about how they are calculated.

You can search for the taxonomic group that you are interested in, pick and choose the organisms of your interest and download the table in CSV format. It will have the NCBI GeneID, RNA and protein accessions.

This is more of a comment, but due to the lengthiness I am posting it as an answer, which it isn't.

If by protein family you mean more than the 3-5 similar protein in bony fish and tetrapods resulting from the x4 genome duplication after the split with lampreys, the solution by @vkkodali is perfect for you —and I think that is the case. Doing a Blast of the gene with human and Petromyzon marinus as an outgroup also works well especially if you want to infer some relationship between them. The huge ABC transporter family is one of the exceptions, so this trick won't help as it duplicate many many times across the tree of life.

If you meant domain fold family, i.e. in the structural sense, like TIM barrels, Rossmann folds, β-propellers (WD40 repeat), SH3 and so forth, you are after PFam families, for which Uniprot is a much better database than NCBI, albeit trickier to parse programmatically: uniprot: P33897 gives Pfam: PF00005.

Not the answer you're looking for? Browse other questions tagged ncbi literature-search or ask your own question.

1
ncbi...eutils/esearch.fcgi: How to search now in the snp database?
4
How to export web NCBI tBLASTn results in table format with many queries?
3
How to query NCBI (Nucleotide database) by a feature qualifier?
3
How can I obtain a list of all NCBI gene ID's along with their full name, symbol, and also known as symbols?
3
How to find all WGS assemblies accessions of a species
6
How to search for high coverage SRA entries
3
How to obtain NCBI Nucleotide (Entrez) IDs for all E coli sequences?
0
How do you search for new enzymes that are more stable for handling, immobilization?