after comments on my original post, I will ask my question again here

One thing to have in mind is that some RNA species are abundantly expressed in many cells, other are very rare and have a low expression value.

I tried to do this with a linear model (for each of the RNA species, negative control vs. single RNA), computing z-scores, infer p-values and correct for multiple testing. For some RNA species, it works just fine. As soon as I have many cells expressing a certain RNA, the thing gets more tricky because the slope of the linear model doesn't reflect the linear relationship of negative control vs. RNA species in non-expressing cells because it is more shifted towards the "real" expressing cells.

To visualize the problem, I attached two plots. One plot showing high RNA expression many cells (left plot) and one from an RNA species which is expressed on a very low level in few cells (right plot). Blue colored dots are considered as expressing cells according to the linear model. As you can see, for the scenario shown on the left side, many "real" expressing cells (low expression level) are not detected. 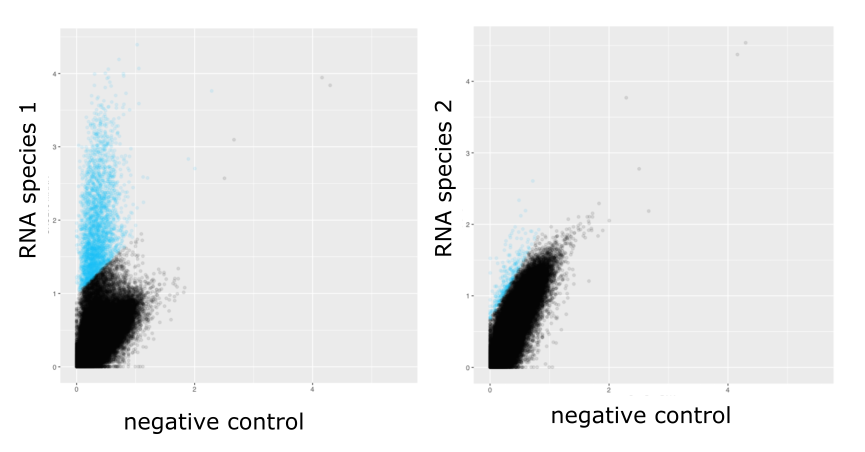 Any ideas which statistical model would better fit to detect those cells?

Thank you for your suggestions!

19
What is the actual cause of excessive zeroes in single cell RNA-seq data? Is it PCR?
2
Why do I obtain very strange results with DESeq2?
3
Why is cell count stated relative to animal size?
4
What is the correct way of dealing with the analysis of data from flow cytometry?
2
Low custom tdtomato gene content
1
What is the best way to address the question of doublets and multiplets in a single cell RNA seq data set?