Showing name of genes in boxplot

I have a long format data frame like this

And by this code

I have this box

I have added this line to my code where I got

I want to show the name of genes in box plot but I don't how, cam you help?

In addition, to have several errors in your code for plotting (for example, you are using df for plotting and then df_melt for geom_text but you didnot mention what is it). Based on your graph, it seems that you have issues with the melting part.

However, these are quite secondary issues that are probably be fixed with the code below. with your example, there is one trick because you are using jitter to plot your points (that is not addressed by the link that @ATpoint provided in comments). This will randomly position the point at the right y value but with different x position in order to not overlap points.

So, when you will add your text label, the labeling won't fit to the position of points. But you can make the jitter reproducible by adding a seed (see this github discussion: https://github.com/tidyverse/ggplot2/pull/1996). However, geom_jitter function does not have the argument seed, so you can use geom_point function and the argument position_jitter instead.

So, using the few genes that you provided as an example. I have to reshape it (a step you probably did but you did not provide in your question), here I'm using pivot_longer function from tidyr package:

And then, for the plotting part, you can use geom_text_repel function of the ggrepel package to add labeling without overlapping your points: 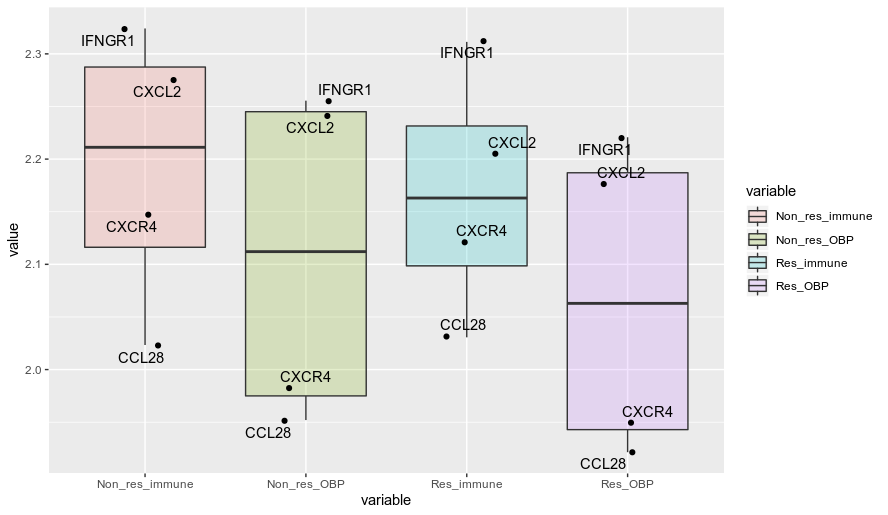 If you have a long list of genes, it will be pointless to show all of them on the boxplot. It will makes things really illisible. If you want to show some particular genes of interest, make a subset of the original dataframe. A lot of posts on SO and here have addressed this subsetting.

Not the answer you're looking for? Browse other questions tagged r ggplot2 or ask your own question.