Is there a aminoacid mutation that forms similar protein? [closed]

Ask Question
Asked 1 year ago
Active 1 year ago
Viewed 34 times
0
$\begingroup$
Closed. This question needs to be more focused. It is not currently accepting answers.

Want to improve this question? Update the question so it focuses on one problem only by editing this post.

Is there an amino-acid shift that will 99% of the time end up resulting the same biochemical function/structure and implications? Like Alanine replaced by Leucine will code in 99% of the cases(at any position that first has Alanine) towards proteins that will function the same without big percentual changes in how good it binds or catalyses.

I do have a big amount of mutations. I'd like to filter them out on chance of biological/phenotypical impact, and since some amino acids look like good substitutes by eye (if I look at the molecular structure)

A mutation is most often likely to be either neutral (no effect) or destabiling (protein misfolds). Changes in activity require changes at the active site or the entranceway to it —which are often only a handful of residues, so are very uncommon.

So the answer to your question is most mutations keep the activity, although a large fraction break it. While to get a new activity the process is more fluid and is not boolean.

NB. Not all proteins are enzymes, but for simplicity I will concentrate on enzymes.

Neutrality and core vs. surface

The outer residues of a protein, the surface residues, are very tolerant to mutations. Unless they are part of an binding surface (interface) or the change results in a charge change that is. The core residues on the other hand are more sensitive to mutations.

One can do a scan in silico or in vitro or in vivo to determine the mutational landscape of a protein, which can take various forms.

This being Bioinformatics stack overflow I'll give an in silico example. The following for example is a heatmap I did some time back with Rosetta pmut_scan, which is a classic tool for this and shows in the y axis the residue it was mutated to and on the x axis the position. A larger change in Gibbs free energy of folding) relative to wild type (∆∆G) means it is destabiling, but anything less than 5 kcal/mol is neutral. As you can see many are neutral, but some half are destabiling —with a caveat for proline, which require a backbone change. 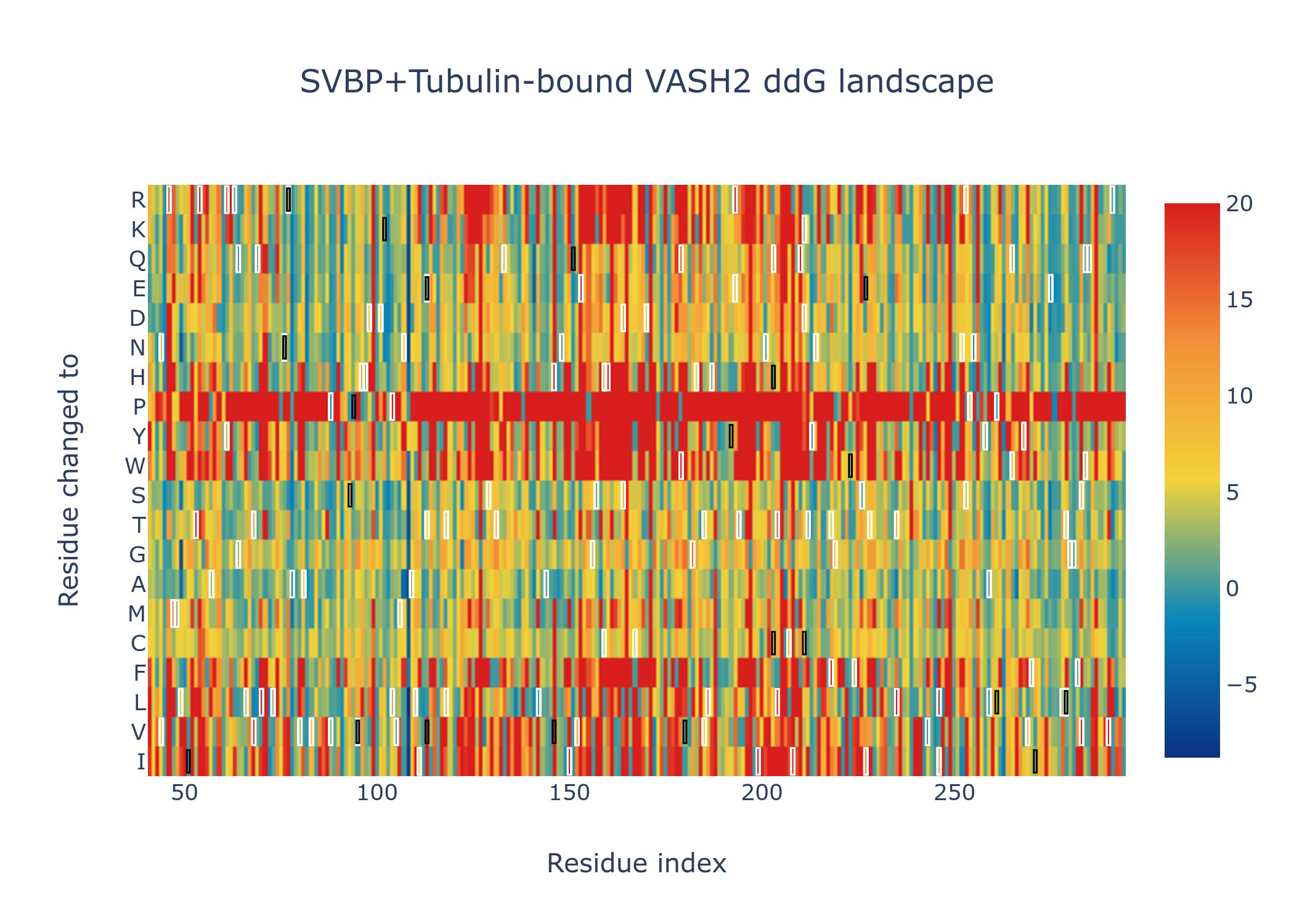 Drugs inhibit enzymes by binding the active site. Therefore resistance is often costly. There are some nice papers that look into the fitness cost and mutational landscape of HIV protease or β-lactamase. In this situation a strong epistasis is seen. That is, a first mutation that confers resistance to the drug greatly destabilises the protein, while a second compensates for the first mutation.

An enzyme can catalyse a reaction well on a given substrate, because it was evolved this way (technically the encoding gene evolved, but shh). This is the physiological activity. However, enzymes can also catalyse side activities on similar substrates with a lower turnover and higher Michaelis constant. This is especially true for substrates it was not selected against. This is called "enzyme promiscuity". The tolerance of the physiological activity to mutation is called "robustness", while the ability to increase promiscuous activities is "plasticity". Different enzymes have a different balance of the two.

So a mutation may change the strength of the physiological activity, but may result in a new promiscuous activity that can be used as a stepping stone for selection to increase this activity. Therefore, as you can see it is not a binary switch, except for a few very specific case.

Proline is a very strange amino acid as it is a secondary amino acid. It lacks a hydrogen on the backbone nitrogen so it cannot form the required hydrogen bond for an α-helix. And can adopt a cis-conformation with minimal penalty (whereas it is about 5 kcal/mol for other chiral amino acids). So changes to this amino acid are often very destabilising.

Protein cores tend to be hydrophobic so changes to the hydrophobic residues are often deleterious, especially when going from a small residue to a larger one.

The remaining residues are frequently found on the surface so may be neutral. However, some are found in the active site and may be able to shift the parameters of the ligand space for that enzyme. A change in charge may result in an increased specificity for a different set of substrates for example. A size change from a larger amino acid to a smaller one may result in a broader range of promiscuous activities —mutations to alanine for example.

So ironically, polar and charged residues as they are frequently found on surfaces are the residues which are most often neutral, but in a small amount of cases they may change activity.

Not the answer you're looking for? Browse other questions tagged mutations or ask your own question.

11
State of the art mutation simulation software
5
Show presence of known mutation in RNA-seq data
0
tool for the prediction of impact of mutations on protein localization
3
How can I get a list of papers where a particular mutation has been mentioned?
1
Are there databases to annotate non-coding mutations?
1
Is there a tool for synonymous recoding of DNA sequences?
1
Model the effect of treatment on mutation burden
0
How to calculate mutation rate and mutation sites in a genome using FASTA file?
0
Is there a way to customize what observations are plotted in ComplexHeatmap?
0
How do I create a VCF file of all known pathogenic mutations in a gene of interest?