First of all, I'd like to apologize for any spelling or grammar mistakes.

I'm having a problem using R for a classification problem. My dataset contains ~300.000 genomic data, and the features are DNA-related features (number of dinucleotides, number of trinucleotides, the CG Content, and some more). In conclusion, I have a dataset of 300.000 rows and 84 columns (columns= features). The 84th feature is basically the classification variable (there are two classes: class 1 and class 2).

I split the dataset in train set and test set and fit the train set to create a model using different methods, like Random Forest, XGBoost, Adaboost, etc. and check the accuracy using the test set.

But I can't just ignore them. I thought that it would be a way to create two differents models, but doesn't know how to figure this out.

Then I thought that there could be a way to find which variables from the two subsets have strong differences, but even if I figure this out, I don't know what's the way for example to scale the original dataset to prevent those differences from keeping the accuracy in 87% in every model (using the original dataset of the 300.000 rows). 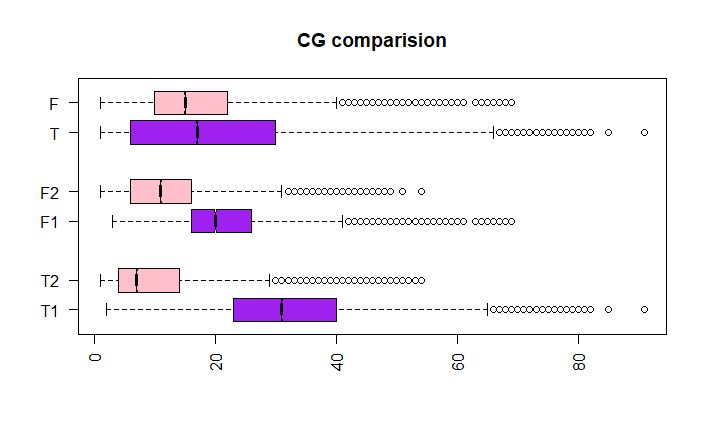 As I'm a new beginner in R and in machine learning, I hope you do understand my problem. Thanks sincerely.

You could be seeing the effect of SNPs on haplotype-driven conditions (i.e. where a combination of multiple variants predicts the class, rather than a single variant).

Do you have any method to determine the age of particular variants (e.g. via an LD plot to find inconsistencies between variants and the surrounding block structure), so that you can see if that correlates with the likelihood of error?

Not the answer you're looking for? Browse other questions tagged r genomics dna machine-learning or ask your own question.

4
Preparing binary matrix data for Scikit classification algorithms
1
How to superimpose barplots in karyotype graphic using the chromPlot Bioconductor package?
1
Deep learning RNA sequences
0
Get regions' information from DNA sequence data (bsgenome.hsapiens.ucsc.hg19)
2
how to easily make complex Euler/Venn diagrams in R?
0
How do you find differences when your metagenome sample size is small?