I performed a blastn search of NGS data against ssRNA database download from Internet, with a expected value 10-4. The size of NGS data reads is of 125 bp.

I have analyzed the blast results of the libraries. These libraries are from different habitats. The most difficult habitat, oakwood, produced a blast results with a maximum length of 51 bp. These results have a qcov of 100 (in most of the cases).

I would like to know if these low length sizes comes from degradation?

Should do I filter these samples with a length = 125 bp with the aim to obtain results with better quality or with a qcov of 100 is enought to get reliable results?

Thanks you in advance.

I had a think about this one and am stumped. I thought there could be a connection with acute oak disease (AOD) or else chronic oak disease (COD), which are emergent infections threatening the population. However, they appear to be fungal and bacterial infections rather than viral.

Single stranded RNA plant viruses are very common, more so than in mammals, but to achieve the results you are obtaining the trees would need to be really sick if the predominent RNA was viral. Short viral RNAs are produced regularly by viruses as defective RNA and its a major area of research, considering a mechanism of defective interference,

In context it would be weird if this RNA swamped the tree/plant, you need an actively replicating virus for this stuff to appear. So I don't think its either viral or defective viral RNA.

The antiviral response in mammals can involve RNase and this could explain your degradation. Essentially, mammals (probably vertebrates) kick-back hard when virus appears. However, I couldn't really find evidence of this in plants.

I don't think the results you obtained have a clear biological explanation in pathogenesis. The best explanation is it was wet lab-technique, e.g. library construction resulted in overdigestion/fragmentation. The only thing I can suggest is template assembly using a normally distributed plant/oak RNA library.

I was probably overthinking in forging a link with an emergent (tree) pathogen. 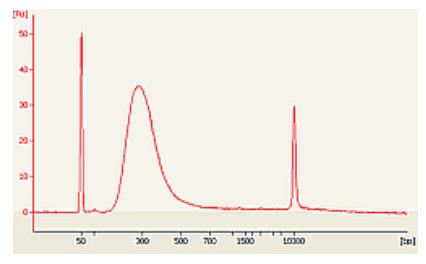 Not the answer you're looking for? Browse other questions tagged blast ngs blastn or ask your own question.