Is outlier detection the right choice for determining if a value lies singificantly away from the mean in a population in gene frequency?

I have the following dataframe that is comprised of enzyme substrates as the variable and then the unique number of times enzymes capiable of degrading this substrates appeared in my genomes and then tot total count of times all of those enzymes appeard in my samples. For example, a 7 unique enzymes were found to be capiable of degrading chitin, and they occured a total of 298 times across my genomes.

I wish to see if any particular substrate has significantly larger occurance in both unique and total, than the rest of the substrates. Would outlier detection be appropriate for this or would a simple T-test do? 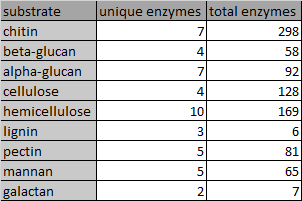 I agree you have the right idea because that data doesn't look at all linear, so regression analysis looks really complicated. Your approach a straight comparison keeps it simple and is within the biological question you are asking,

However, I would use a non-parametric such as Wilcoxon instead of a T-test. I don't fully know the null distribution you are comparing it against. Wilcoxan doesn't require an assumption of normality. T-tests invariably require a transformation to normality and that gets complicated, but a log or sqrt transformation might be okay. If Wilcoxan produces a no significant difference you report it and move onto a T-test.

Not the answer you're looking for? Browse other questions tagged statistics or ask your own question.

1
What does it mean for an amino acid to match with itself 99% of the time in a PAM1 matrix?
0
Hypergeometic test for the overlap of two set of genomic intervals (e.g. from Chip-seq data)
2
Determining significance of a variable in a glm model