What does instantaneous rate matrix mean?

PhyML is a tool used for maximum likelihood estimation analysis. I was running a PhyML analysis to check the rate of nucleotide change in DNA sequences and in the PhyML output, there are rate parameters and an instantaneous rate matrix. Could you please clarify the difference between the two? 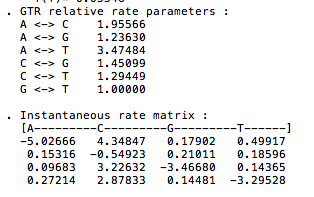 What I've understood so far is that the rate parameters indicate, for ex: that the A -C transition rate is 1.95 and so on. If so what does the instantaneous rate matrix tell us?

Reversible At its simplist the GTR rate, is the General Time Reversible model and most importantly infers the matrix is "reversible", thus as many A mutations will go to C as C mutations go to A and the number of mutations is relative to the G-T mutation rate. The G-T mutation rate is one of the least common mutations (transversion) so all other values are above 1. If you plotted this as a matrix the top right-hand matrix is identical to the bottom left hand matrix because its reversible, i.e. A <-> C . This is cool because you don't need to tell the algorithm which sequence is the root.

Directional The "instantaneous" matrix is a directional matrix, thus A -> C is not the same as C -> A. In order to obtain an accurate directional matrix you need to assign a root, its like lets start from the deepest node in the tree (the one between the root/outgroup and all ingroup sequences) and now - if that is correct - we can remove the restrictions of reversibility and impose directionality on the mutation process. This is needed if you are performing molecular clock type calculations. However, the key is assigning the root/outgroup - if it assigns it e.g. by mid-point rooting that is not necessarily a good idea.

Advice. My advice is if you are building a basic tree and haven't assigned a root/outgroup, obviously using GTR which is a good move, then you don't to worry about the intananeous matrix because it might not be meaningful. If you are running a molecular clock/dating/rate estimate type model and a very clear what the root/outgroup is and that is specified in the input, then the instananeous matrix becomes important.

The mutation rates of GTR and instananeous are not directly comparable because the GTR rate is with respect to G <-> T mutation, whilst instananeous is primarily concerned with the directionality of mutation and is a 12-parameter model, as opposed to GTR which 6-perameters, where one of those parameters is the reference.

Not the answer you're looking for? Browse other questions tagged phylogenetics phylogeny hidden-markov-models nucleotide-models or ask your own question.

13
What is the best way to account for GC-content shift while constructing nucleotide-based phylogenetic tree?
8
A tool or webserver for building PSSM matrix
5
What is the meaning of the Hmmer profile?
1
What do negative dN or dS mean in cal_dn_ds in Biopython?
9
A new paper suggests the Corona Virus has "Uncanny similarity of unique inserts in the 2019-nCoV spike protein to HIV-1" - What does this mean?
0
Relationship between the instantaneous rate of change of a continuous time Markov model and the rate of a global clock model?
1
Why do we scale the rate matrix of a substitution model to make the average rate of substitution equal 1?
0
How does one convert a log-likelihood substitution matrix into a probability matrix?
2
Simulation of DNA sequences through substitution rates