Interpreting this plot from GSEA

I have done GSEA in pre-ranked way

got this plot for KRAS pathway 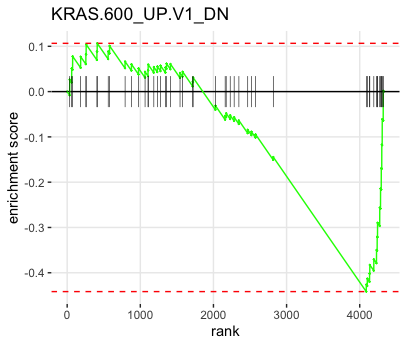 I interpret this as; KRAS pathway in being down regulated in responders

When I separated genes for up and down regulated 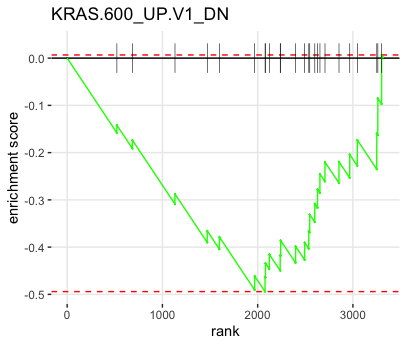 A gene set enrichment analysis (GSEA) tests for enrichment of a gene set within a ranked list of genes.

The primary outcome of the analysis is enrichment or no enrichment. Gene sets frequently include correlated genes, and that correlation can be positive (enhancers or co-expressors) or negative (e.g repressors). It's reasonable to include negatively-correlated genes within gene sets because some pathways involve both enhancement of a particular biochemical pathway, and suppression of a pathway that carries out opposite things.

I don't know about the KRAS pathway you're comparing against here, but a statement I would make based on interpreting that GSEA graph would be something like, "The KRAS.600_UP.V1_DN gene set is enriched when comparing the expression of responders vs non-responders."

I'm not quite sure how you separated up and down-regulated genes (code would be helpful with that). Your down regulated gene plot looks like it's ranked in the opposite direction to the combined plot, which is not what I expect. I think that determining an enrichment score separately for upregulated and downregulated genes (within your ranked list of genes) is a good idea, but it shouldn't change the direction of the enrichment curve within each category. It will, however, alter the form of the curve, by stretching or compressing values vertically and altering the start/end offset.

In Deseq2, it depends on contrast eg. if your contrast <- c("Condition", firstC, SecondC) is then -ve is downregulated in FirstC and same for +ve. It is always better to take look at count data for the confirmation (responders versus non-responders samples).

[for more detail you can refer here][1]

Not the answer you're looking for? Browse other questions tagged r rna-seq pathway gsea or ask your own question.

6
Clarification on Gene Enrichment
3
Is there anything similar to GSEA for locus-based (instead of of gene-based) data?
4
size of the pathways for analysis and filtration
1
GSEA - Gene Set Enrichment Analysis - in R studio
1
Doing plot with this data
0
Griding ggplot object in r
0
A box plot of qualitative variables
0
GSEA enrichr with 10x genomics differential_expression ranks