I did a bunch of GWAS analysis (linear model without covariates) with applying different quality controls. How to choose the optimal settings when filtering for minor allele frequency (maf), Hardy-Weinberg equilibrium (HW) and missing call rates (mcr)? Are there any rules? Here are some examples: 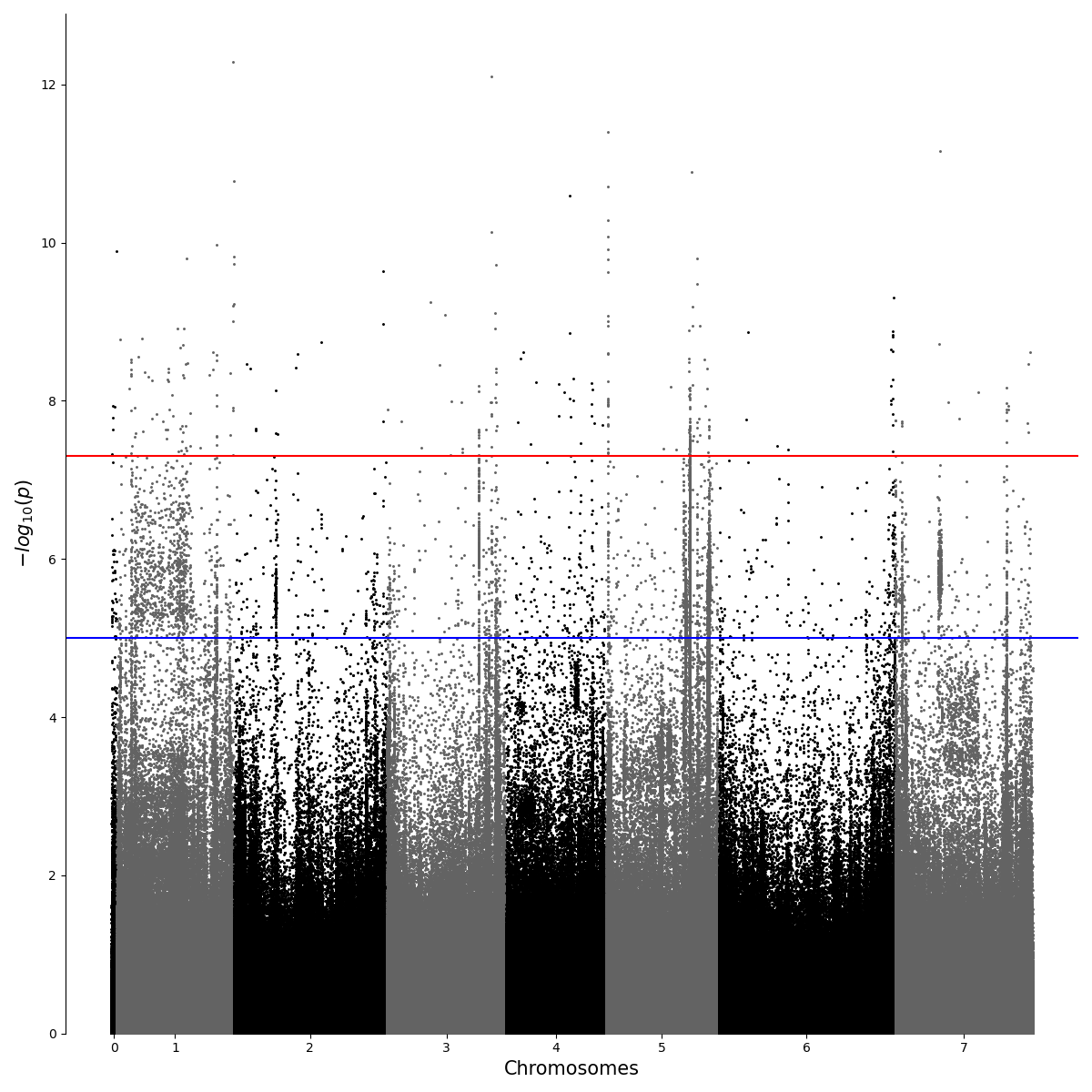 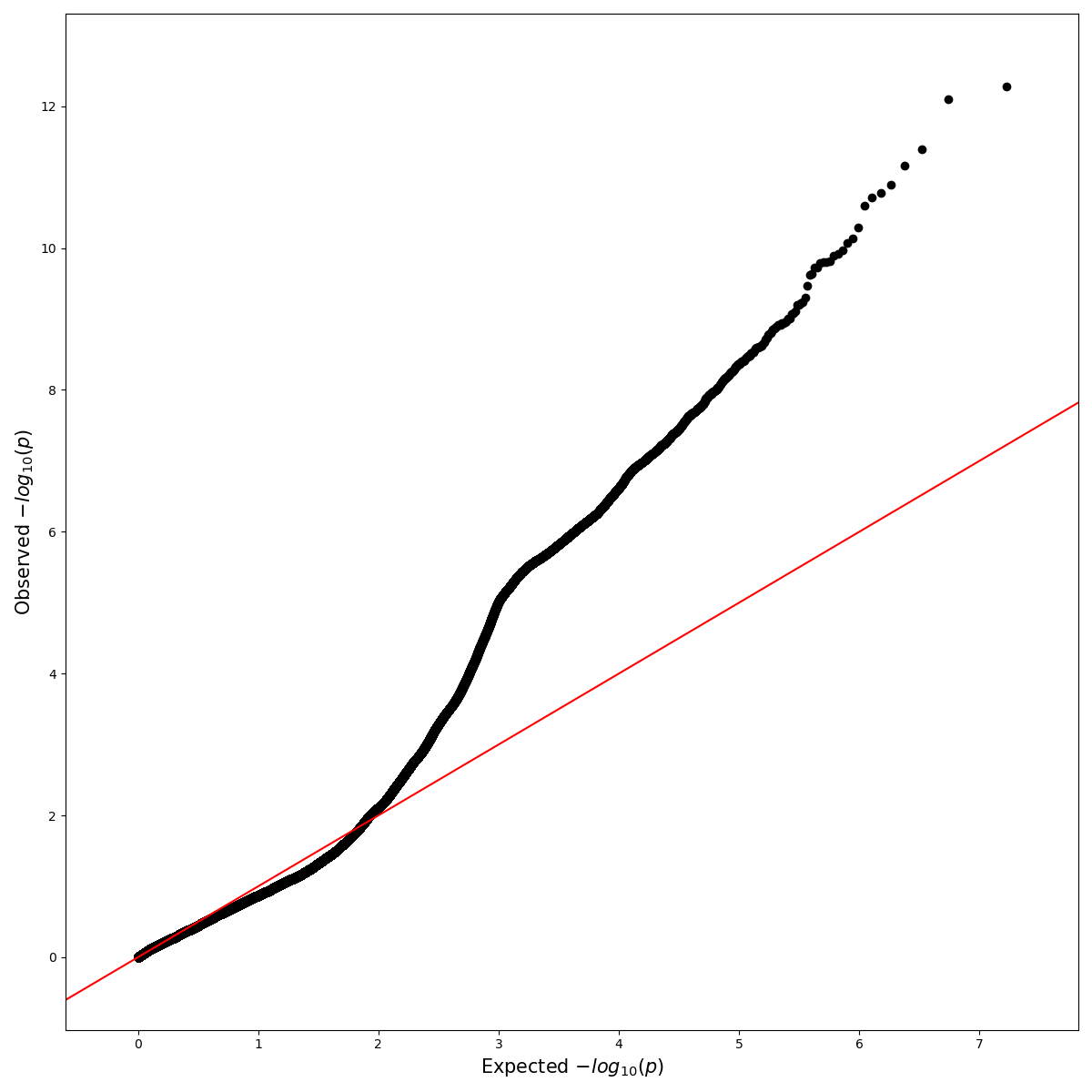 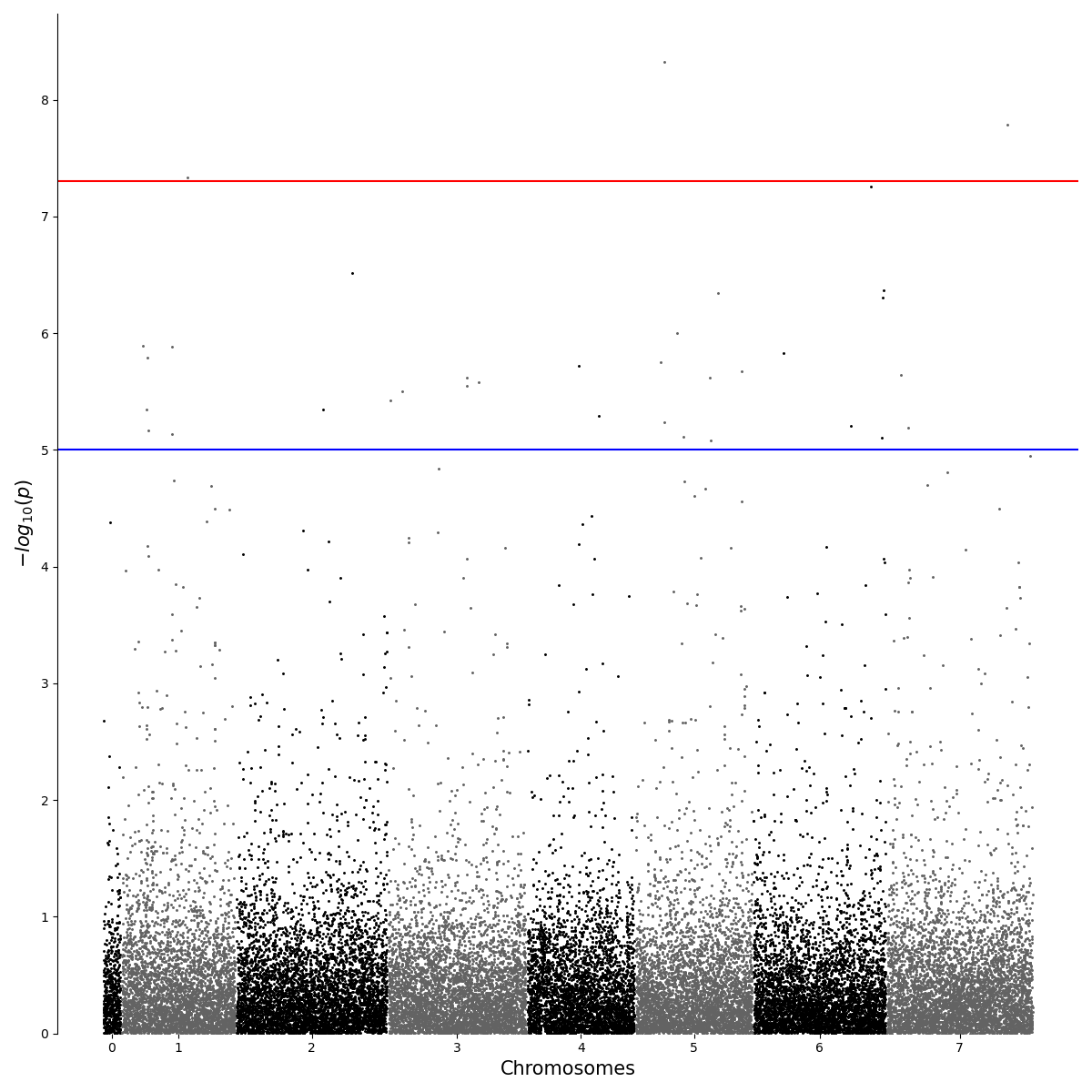 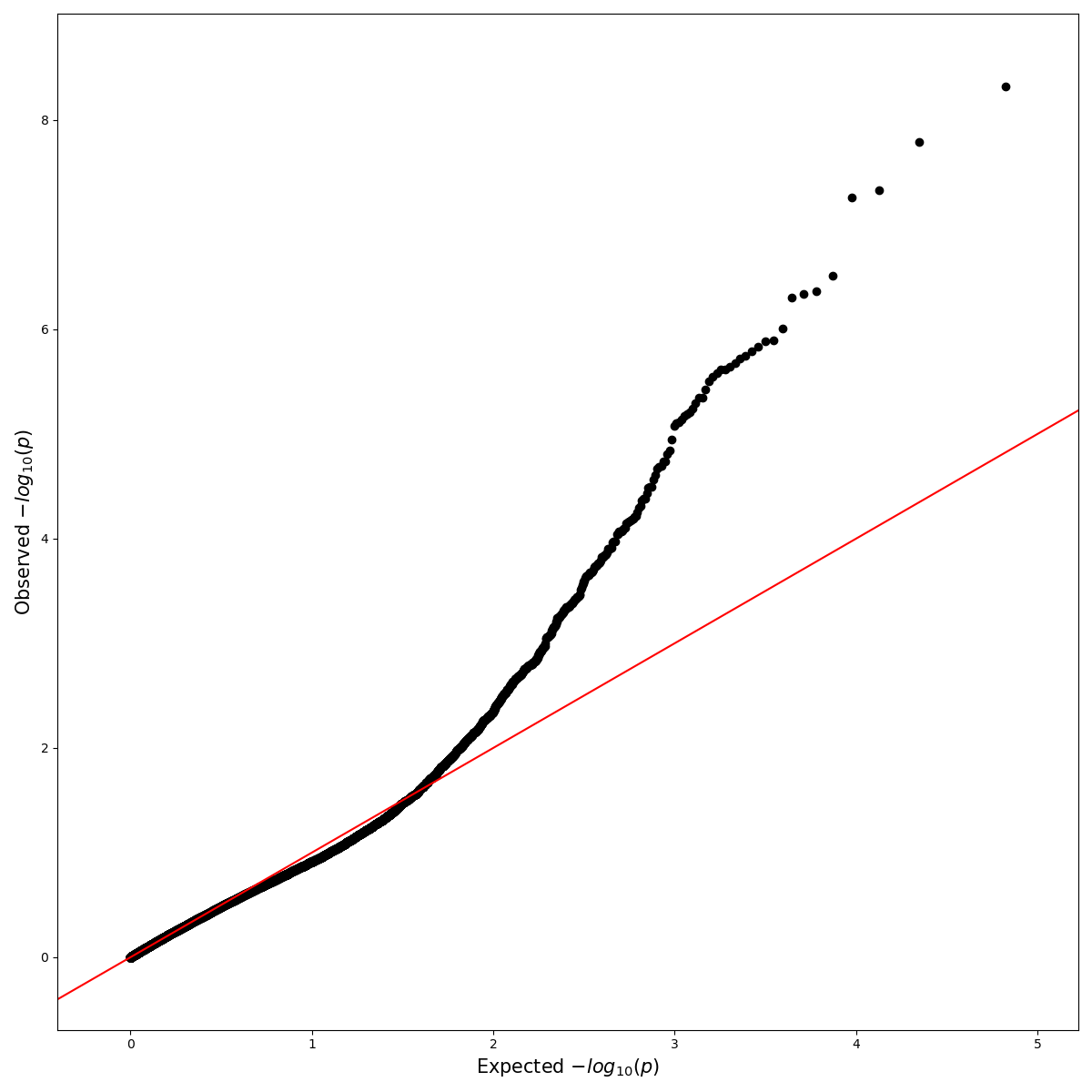 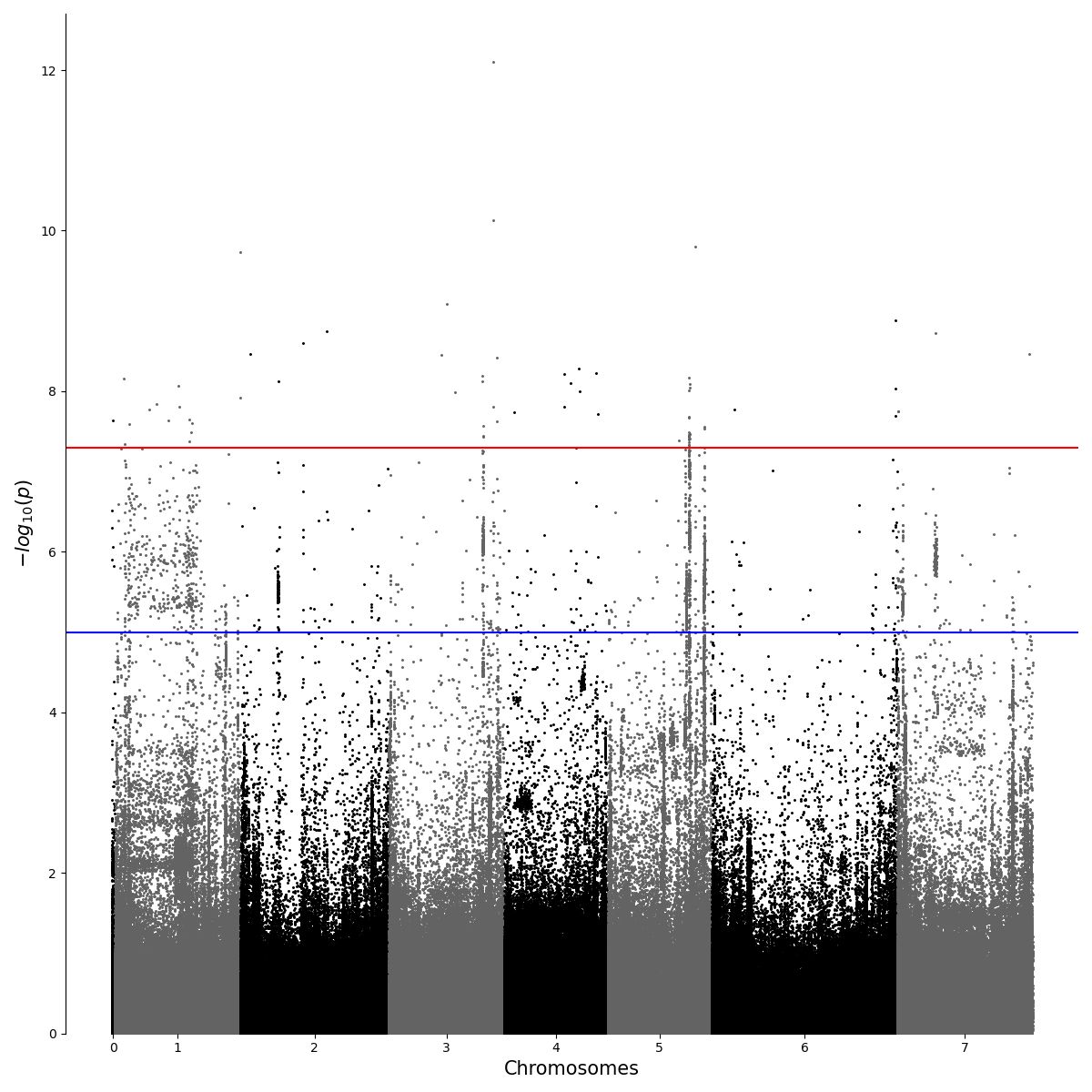 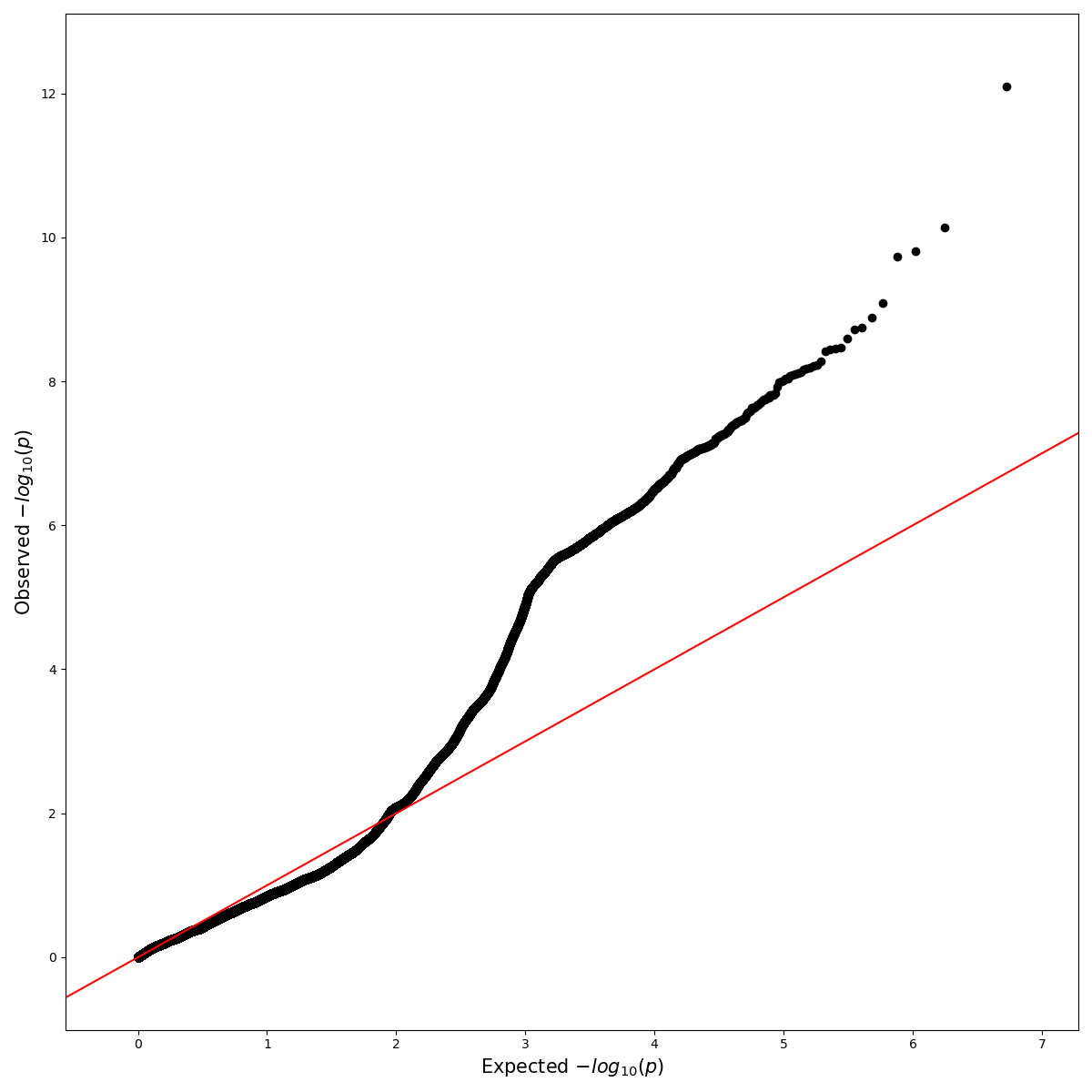 The genomes under analysis are under predominant linkage disequilibrium, i.e. linkage. Chromosome 1 shows strong (or stronger - cut-off depending) HW signal as do one or two telomeres - telomeres are known to undergo recombination, so this may not be unsurprising. Nothing wrong with the HW analysis for the core conclusions, its the stuff between the red and blue lines thats difficult (Q-Q plots).

The Q-Q plots are a bit more complex and I would go with the lower graph you presented together with its HW-analysis. There is clearly part of the data you are not accounting for, @gringer says the Q-Q plot conform to the beta distribution .... they should be bang linear. Lets look in more detail,

Given you have a cut-off (red line) at around 5.5 then I'd sort of try and talk your way out of this one. You can do a full investigation, such as transformation to linearise the entire Q-Q plot. Personally I've never done this within HW analysis so I dunno, I've done it for GLM. I'd just say they between the blue and red line represents a complex HW signal which we can't be interpreted but either side of that boundary we're good to go. In other words keep it simple.

Based on the QQ plots, filter out variants with p > 0.01, then display the beta statistic (or whatever other statistic you're using to demonstrate association). If you want to incorporate the p-value in the displayed results, show the minimum test statistic from a 95% confidence interval. Here's an attempt I made at doing that with some GWAS summary statistics relating to household income (something that wouldn't be expected to have a heritable component):

After looking at the test statistic, you may be able to make better decisions about thresholding with the other values. One thing you could try is to incorporate those values into a scatter plot that shows more than two dimensions. The other statistics could be represented as size, colour, or Z location on a 3D scatter plot.

P-values should not be overemphasised, used for ranking, or displayed on their own. See the American Statistical Association's report on the p-value for more information:

As far as I'm aware, the p-values as calculated by GWAS software represent uncertainty in the test statistic (i.e. t, or beta), and not the probability of association. If you want to calculate that association probability, carry out bootstrap sub-sampling of the individuals and then determine the proportion of sub-samples in which the tested variant appears in, say, the highest 5% of variants, ranked by the test statistic. Instead of filtering on HWE, MAF and MCR, you could try filtering on the bootstrap proportion instead, which should incorporate all statistics that introduce uncertainty into the dataset.

More details and figures can be found on this poster:

If you're going to be generating a PCA on these data, please consider labelling the cases and controls (or low/high for quantitative traits) on the PCA to verify that the groups look similar in terms of overall population structure. Hopefully you won't find any blobs in the PCA that have only one of the two groups in them, but if you do, they should be dealt with first. Any differences in population structure (even very small, subtle differences) will dominate the GWAS results because structure-associated signal will cover a huge region of the genome in comparison to effects from a few (or a few hundred) SNPs. Here are some papers I've found insightful regarding this issue:

Not the answer you're looking for? Browse other questions tagged python gwas plink or ask your own question.

5
How to deal with correlated SNPs in GWAS?
1
Odds ratio calculations in GWAS paper
1
Pandas automatically rounds GWAS P-value
1
GWAS MAC filter Interpretation
1
Random GWAS data generator
0
How do I lift GWAS results to hg38?
3
How to estimate the phenotypic variation explained by top SNPs from a GWAS study?