I had a question for the community.

I have a genome of a new species that has been sequenced via 150pb Illumina paired-end.

To verify the quality of the assembly I used the BUSCO pipeline which allows me to search for 99% of the BUSCO genes (gene not duplicated) present in a taxon in the genome of my species.

Globally I only miss 18% of the BUSCO genes, which means that the assembly is not too bad.

Now when I plot the G+C% and the coverage of all the scaffolds containing BUSCO genes (so a priori non-contaminating) I should find a fairly homogeneous cloud.

Instead I end up with two different coverage profiles (noted red and blue below):

I then thought that the low coverage sequencing profile around 4x might be a eukaryotic contaminant like a acarians, however when I blast the BUSCOs present on these low coverage scaffolds I get hits that are very close to the genome of my species...

Does anyone have any idea what these are? 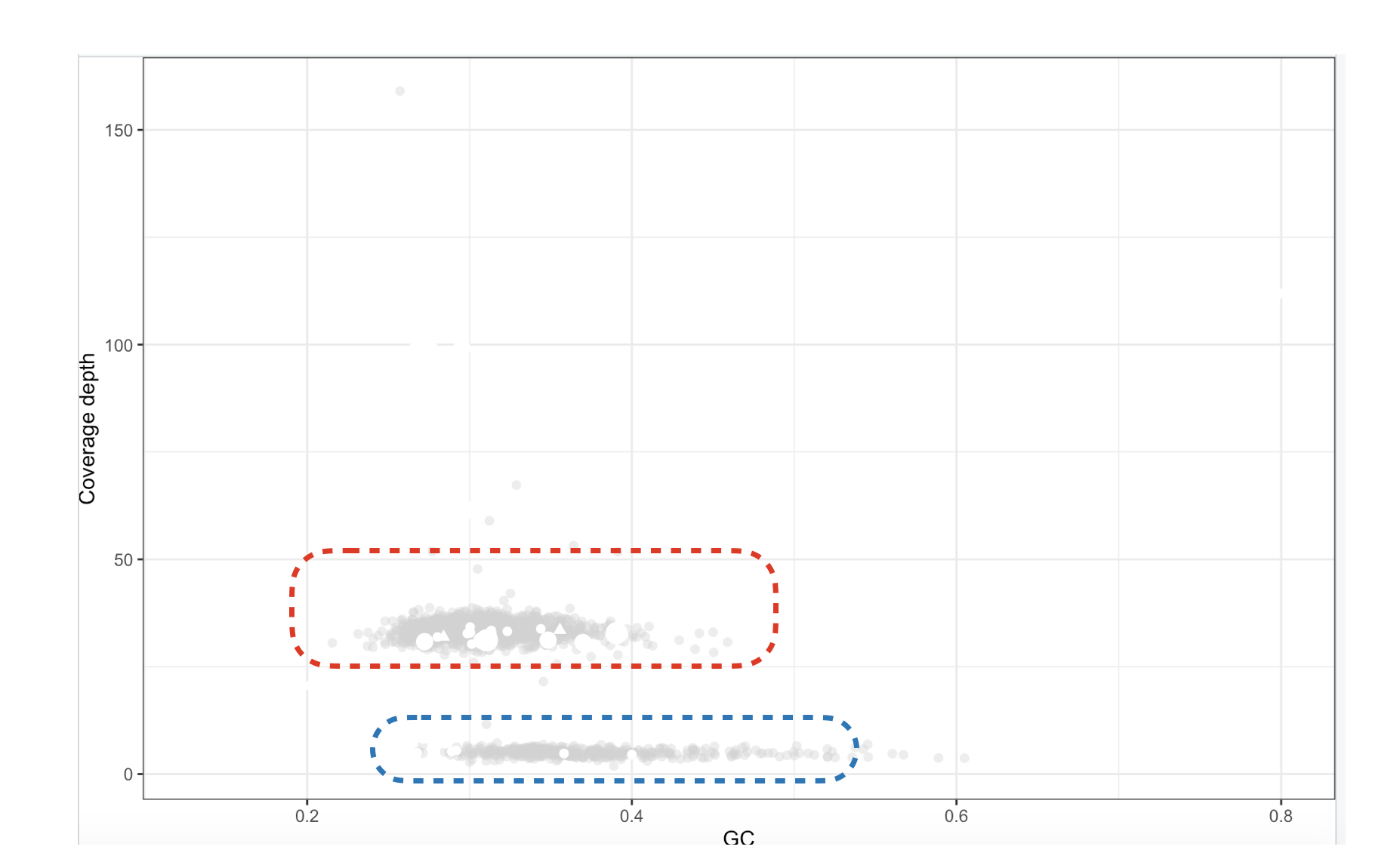 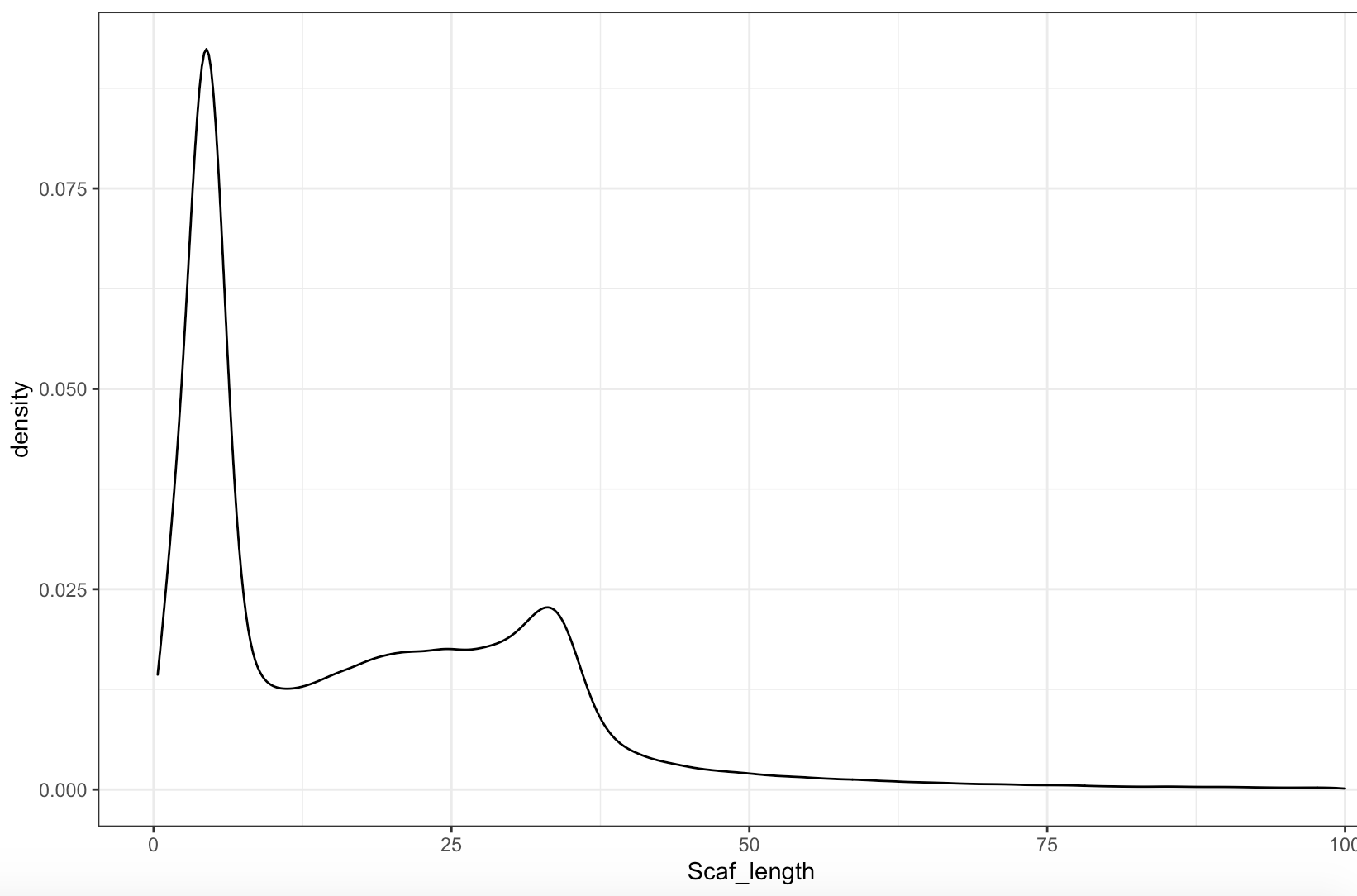 Here is an Icarus summary of the assembly :

Here is the BUSCO summary as well :

I ran the fastq sequences with another aligner (MEGAHIT) to see if it was not because of an assembly issue and I got the same profils coverage see here :

This could be organism-specific. We don't have a lot of info so far, so I would check a few more things:

Run something like FRC_align. Check if there's a clear signal between regions flagged as suspicious by it and your coverage graph.

Is it a eukaryote? Plant? Check where mitchondria and chloroplasts are on the plot. They will have different GC/coverage signals than the rest of your assembly, which is fine, expected even.

Worried about contamination? Run kraken2 on your raw data and see what you get there.

Run RepeatMasker and check if repetive regions contribute to the effect you see.

Finally, unless your specimen is low heterozygosity, haploid, or inbred, you probably have some effect from ploidy. There are numerous ways to check that. A self-self dot plot with MUMmer and looking coverage histograms are a good start. The idea is that you should see two peaks (let's assume diploid). One for the split haplotigs, and one for collapsed.

I checked the GC distribution of 45 genomes in your order. It's kind of all over the place, but there are some bimodal ones: 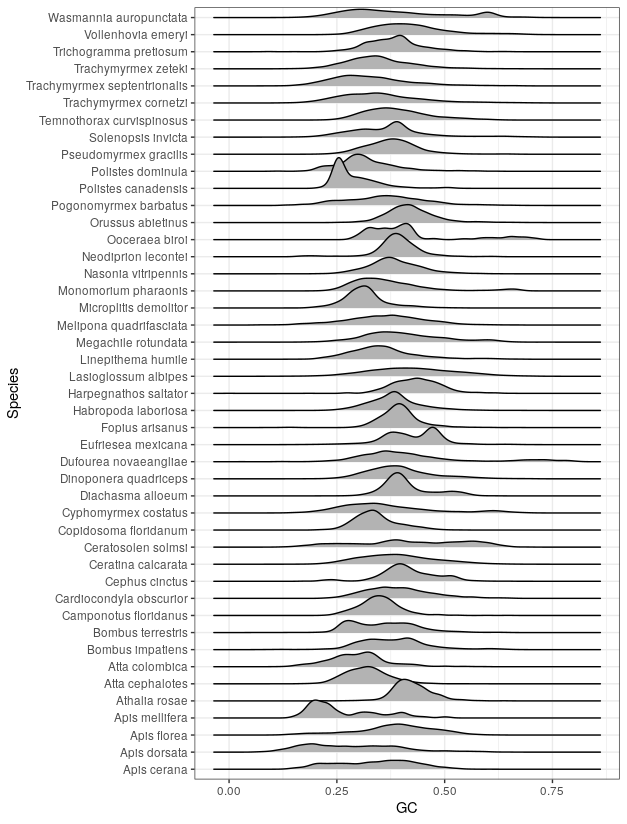 What does GC vs Length look like? Here's the one from the 45 genomes mentioned above: 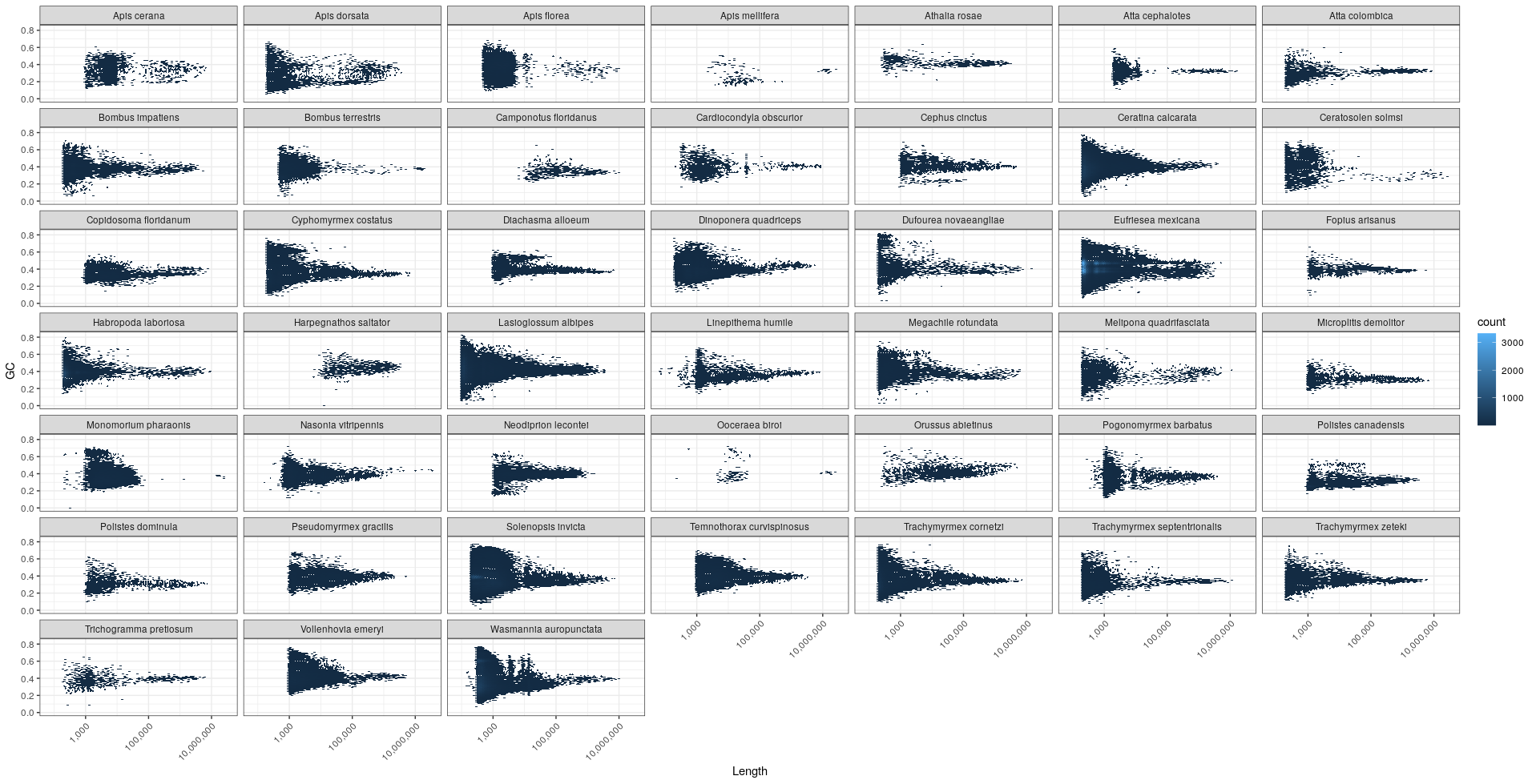 That is indeed puzzling. My best guess would be contamination, even if they carry some of the BUSCOs. I run all de-novo genomes through blobtools, which creates a similar plot to the one you made manually, but also adds taxonomical annotations. It can look like this: 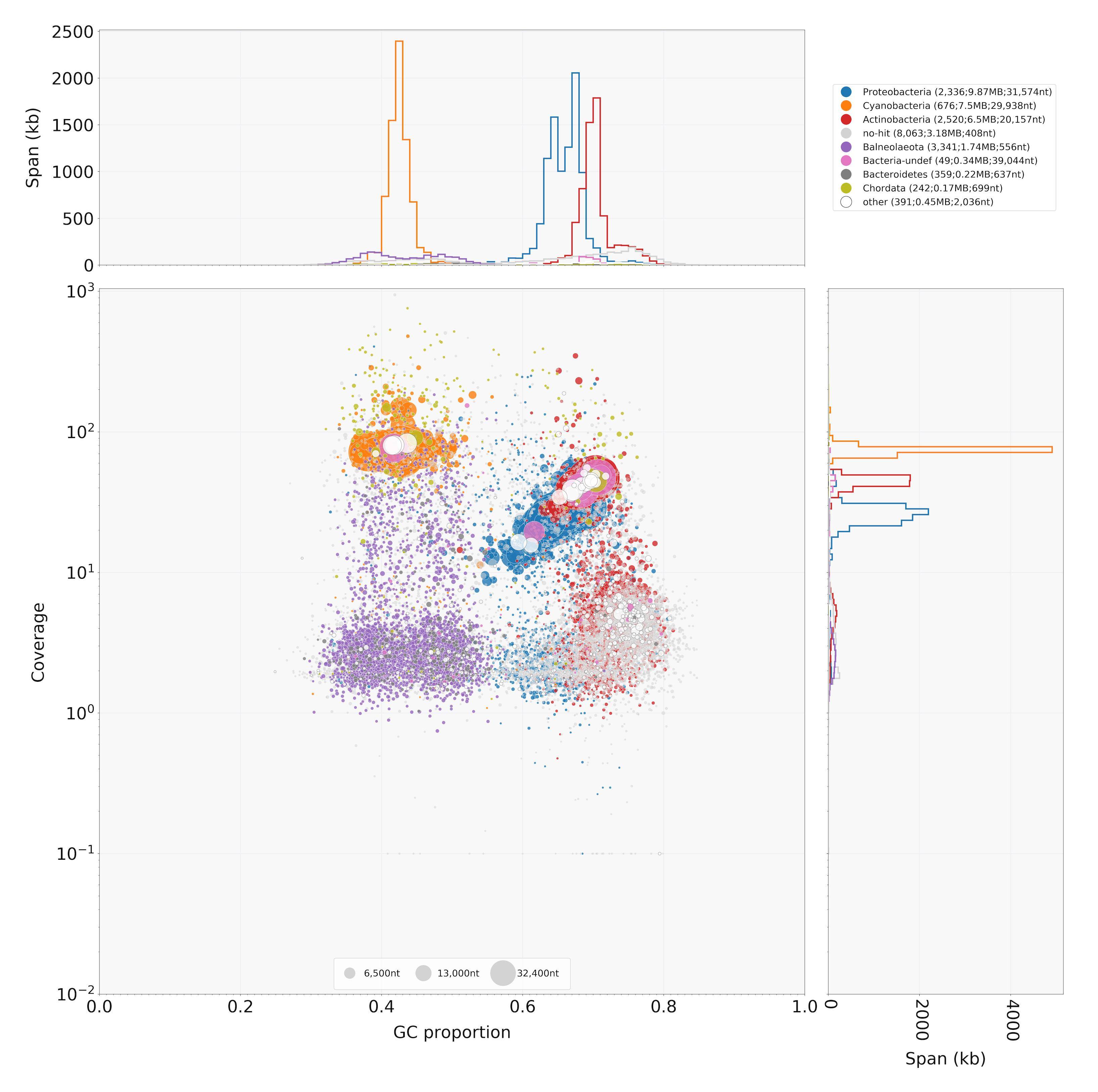 Also, what is the proportion of the genome that is low-coverage? Does it have a significant span? I almost always see a bunch of tiny contigs with low coverage in de novo assemblies, but they usually represent a very small fraction of the genome.

One more thought, are you sure you don't have a tetraploid species? The two coverage peaks kind of correspond to 8 and 32x right? One is 1/4 of the other. We developed some tools to investigate this kind of problems in data.

Just a few more comments. Coverage differences can have various reasons, but all the sequencing biases would cause a skew of the distribution, hence the apparent bimodality of your coverage (more apparent from the two 2d plots) suggests two distinct sources. In general, could be due to various ploidy levels or contamination either by bacteria, endosymbionts or even other species getting into DNA isolation. Now that polyploidy is ruled out, it boils down to contamination, and to figure out what contamination it is, I recommend the tool I liked above.

Not the answer you're looking for? Browse other questions tagged assembly read-mapping coverage or ask your own question.

18
How can I improve a long-read assembly with a repetitive genome?
3
Counts obtained by featureCounts seem much less than observed coverage
6
Genome assembly from error-prone reads
0
Determining the quality of a publicly available genome assembly
1
Decontaminating RNA seqs for de novo transcriptome assembly and annotation of novel eukaryotes
1
Interpreting contig alignments to a reference genome
0
Genome QC + Assembly Pipeline semantics
0
How do you set the coverage in PacBio's Sequel II?
2
How good does the assembly of an NCBI prokaryotic genome have to be in order to argue gene loss?