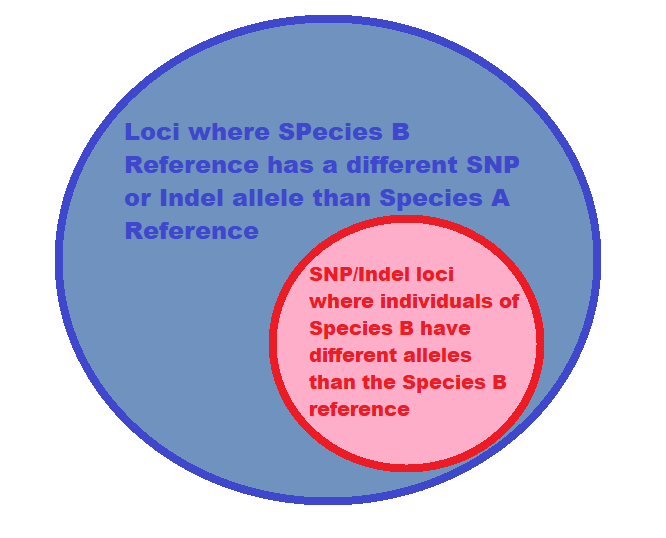 This is a revised version of my original question, edited to include the portions already answered by @Maximilian Press.

My current plan is to...

Does the logic for this new pipeline check out?

You want to find a set of SNPs in populations of two species, for each of which you have a distinct reference genome. You then want to know which of those SNPs are shared between the two genomes (there is variation in each species), and which ones are private to only one of the species (in the other genome there is no variant at that location).

Genomes can have different coordinate systems.

Let's first think about what exactly you are looking at with 2 different reference genomes. For example, here are outputs of samtools faidx for 2 different S. cerevisiae strains, S288C and Kyokai-7:

What you will notice is that there are significant differences between the 2 assemblies. The first is almost all in chromosomes, the second is largely mapped to various chromosomes but exists in thousands of tiny contigs. There is no way to just map reads to them, call variants, and assume that you (or bcftools) can figure out what is going on.

This is possibly an extreme example, but even in the case of two genomes assembled to chromosome pseudomolecules, there is basically no chance that those two chromosomes are on the same coordinate system or have similar metadata. That means again that bcftools probably won't be able to figure it out, because a SNP at position 112929 in genome A will be homologous to position 110201 in genome B.

Liftover: a way to solve the mapping problem between 2 genomes.

You can create a mapping between the two genomes. This is 100% a solved problem in bioinformatics, and it is more or less the same as doing liftovers between different assembly versions of the same genome. I think that you can more or less just use the UCSC LiftOver tool to convert SNP coordinates, unless I am missing something. That how-to guide that I linked is going to give you much better instructions than I can give you, here is a more minimal version that might be simpler.

The only extra suggestion that I have is that the guide uses BLAT to align the two assemblies, and minimap2 is a much faster tool. You may need to fight the input formatting a little bit, but if you run into runtime issues you might make that change. This is why I suggested it in the comment, though I wasn't aware that the liftover docs were so complete.

Ok, with invaluable aid from @Maximillian Press, I've figured out how to find alleles which are variable between two species but fixed within one species.

Here is how you find SNP/Indel loci which are distinct between species A (hereafter sA) and species B (hereafter sB) but are fixed WITHIN sA:

I then use the "sed" function to replace chromosome names with their analogs (happy to give more details if anyone else needs to do this) and also removed the VCF headers prior to making a C++ program which extracts all the rows found in AtoB.vcf but not in AtoA.vcf. My final output was thus all SNP/Indel loci which vary between sA and sB but NOT within sA. Happy to share the C++ program if anyone else needs to do this.

Not the answer you're looking for? Browse other questions tagged vcf genomics variant-calling software-recommendation or ask your own question.

7
How can I speed up INDEL calling/correction on BAM files?
7
What motif finding software is available for multiple sequences ~10Kb?
7
What is indel calling and what is its purpose?
13
Is it possible to use SNP heterozygosity as a proxy for Indel heterozygosity?
5
vcftools: indel size histogram command returns empty file
0
Questions regarding the detection of variants (SNPs and Indels) in mammal
2
Detection of CNV(InDel) of intermediate size
2
What tools can I use to look up my alleles, genotypes, or phenotypes from my sequenced DNA (WGS)?
0
Supplementary aligments in VAF
0
Converting FASTA Sequences to SNP FASTA Format