Why do some assemblers require an odd-length kmer for the construction of de Bruijn graphs?

From the manual of Velvet:

it must be an odd number, to avoid palindromes. If you put in an even number, Velvet will just decrement it and proceed.

the palindromes in biology are defined as reverse complementary sequences. The problem of palindromes is explained in this review:

Palindromes induce paths that fold back on themselves. At least one assembler avoids these elegantly; Velvet requires K, the length of a K-mer, to be odd. An odd-size K-mer cannot match its reverse complement.

It is possible to construct graph with palindromes, but then the interpretation will be harder. Allowing only graphs of odd k-mers is just an elegant way to avoid writing a code for interpretation of a more complicated graph.

To expand on the answer above, in case it isn't clear, we show:

1. Palindromic sequence ⇒ sequence is of even length

Idea: in an odd-length k-mer, its middle nucleotide is 'flipped' in its reverse complement, so the two can never be equal.

Suppose you have a palindromic sequence $X$. Then $X$ is identical to its reverse complement, which we will label $\bar{X}$.

(since $len(A) = len(C) = len(\bar{C}))$. But this is a contradiction, since $b$ is a single nucleotide, and cannot be equal to its complement. Therefore k-mers of odd length cannot form palindromes.

Hence the length of a k-mer that forms a palindrome must be even.

2. Why palindromic k-mers induce self loops

Each node in a traditional de Bruijn graph is a unique string, but in most bio-informatics implementations each pair of reverse-complementary k-1-mers are identified as a single node, e.g for $k=6$:

Hence it will contribute two nodes in the de Bruijn graph:

But since this k-mer is palindromic, $xA = \overline{Ay}$ and hence these two nodes are reverse-complementary, and thus the 'same' node, and so this edge is a self loop at this node.

3. Why are self loops problematic?

Self-loops (if they occur in a node with $in\_degree \geq 2$ and $out\_degree \geq 1$) increase the number of possible Eulerian paths in a de Bruijn graph (or more specifically, in the connected component containing this node, which represents a contig, of which their may be multiple), as you have an additional possible Eulerian path for each time you traverse this node.

This increases ambiguity in reading the graph, as each possible Eulerian path is an extra possible reconstruction of the full sequence. 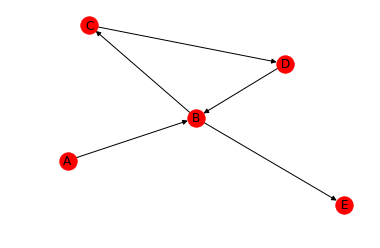 There is only one possible Eulerian path:

However, if we include a self loop at $B$, which is visited twice above, this doubles to two possible Eulerian paths: 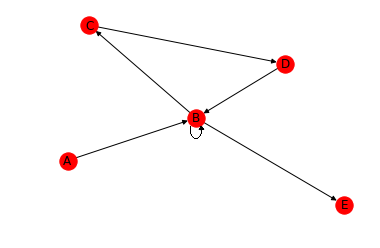 Depending on whether we traverse the self loop during the first time we reach $B$, or the second.

Not the answer you're looking for? Browse other questions tagged ngs assembly k-mer de-bruijn-graphs or ask your own question.

14
How to make a distinction between the "classical" de Bruijn graph and the one described in NGS papers?
8
How to use Python to count k-mers?
6
Genome assembly from error-prone reads
6
How to efficiently compute the exact percentage of non-unique k-mers in a genome for given k?
13
What is the most compact data structure for canonical k-mers with the fastest lookup time?
1
Significance of k-mer length in COVID-19 sequence analysis?
2
Construct the Overlap Graph of a Collection of k-mers
10
Extract sequence context of high-degree nodes in assembly graphs
0
Why must a maximal non-branching path be a contig?