Question about the practical relevance of chromosome position and p-value

Referring to Figure 2b of that article, if I understand correctly, the x-axis refers to the position of each variant in a chromosome while the y-axis is a log transform of the raw p-value of association of each variant with some variable of interest.

My questions is, is there practical importance in finding strong association (high log transform p-value) around one particular position versus finding it on some other position in the same chromosome?

Context: I am a statistics student studying multiple testing. My biology background is very limited.

In the specific case that you are talking about, the answer is very much yes that the specific position is important. Genes occur at (fairly) fixed positions along chromosomes.

The point of that figure, as indicated in the legend, is that the very low p-values are around the gene RPM1. That gene is known to have important natural genetic variation associated with the phenotype in question (the one for whichg they are looking for genetic associations). That figure is therefore an important validation of the methods of the authors.

In terms of finding such data, a fun account on twitter is the GWASbot, that just posts random manhattan plots (which is the informal name for the plot you are talking about), along with links to source data. I believe that that source data includes the p-values for each ascertained position, along with other summary statistics. One example is here.

If you are specifically interested in the topic of multiple test correction, an important related concept in GWAS is that of genome-wide significance.

To unzip and look at the file, use bgzip:

For human population data, it's pretty common for the association statistics to be either included with the research paper, or uploaded to a public database (e.g. see curated compilations like GWAS Central or NHGRI GWAS Catalog).

For plant and other non-human data, there doesn't seem to have been as much drive to include GWAS data with the research paper, and it's often up to the authors to decide to do that. I find this a little odd, given that there should be fewer ethical barriers to releasing non-human public data.

If you're interested in a particular dataset, you can contact the authors, but I acknowledge that such an approach can be too high of a barrier for most interested researchers.

Is there practical importance in finding strong association (high log transform p-value) around one particular position versus finding it on some other position in the same chromosome?

The problem with this assumption is that DNA variation is not statistically independent. Recombination of DNA (and associated reassortment of genetic variation) between two locations is more common when the locations are close, and this linkage should really be accounted for when doing association tests. One way to do this is to combine variants that share the same ancestral origin into a haplotype, then do association tests on the haplotype block rather than the single-base genotype. Even if the particular observed variants are not directly causative, there may be another untyped causative variant (or combination of variants) on the same haplotype block, meaning that the block becomes a proxy for the causative variant.

But this haplotype-based approach becomes quickly computationally intractable when looking at larger regions of chromosomes, and is very difficult to use for comparing populations with substantially different ancestral backgrounds. The workaround (if it could be called that) is to ignore the linkage aspect of genetic variation, and return to those same statistical tests, but declare regions that have peaks of close association to be statistically interesting, and zoom into them to look in more detail at the region.

That zoom in would be a great opportunity to use more complex / accurate haplotype-based tests for confirming an associative signal around a particular region. But for the most part, as with the paper you've indicated, the tests are identical.

However, even ignoring the haplotype issue... <begin rant>

I have a few specific concerns about this pure p-value approach:

In addition, the generated p-values often don't make sense, and I haven't seen any commentary on this. Anything smaller than $10^{-40}$ doesn't represent any reasonable natural random occurrence, even on galactic timescales, but often these astronomically-small p-values can become insignificant through a few random mutations in one of the populations.

As a quick-fix using the existing statistics that are typically presented in GWAS results, where single points are desired, I recommend that people instead use the standard deviation to determine the minimum expected beta score: 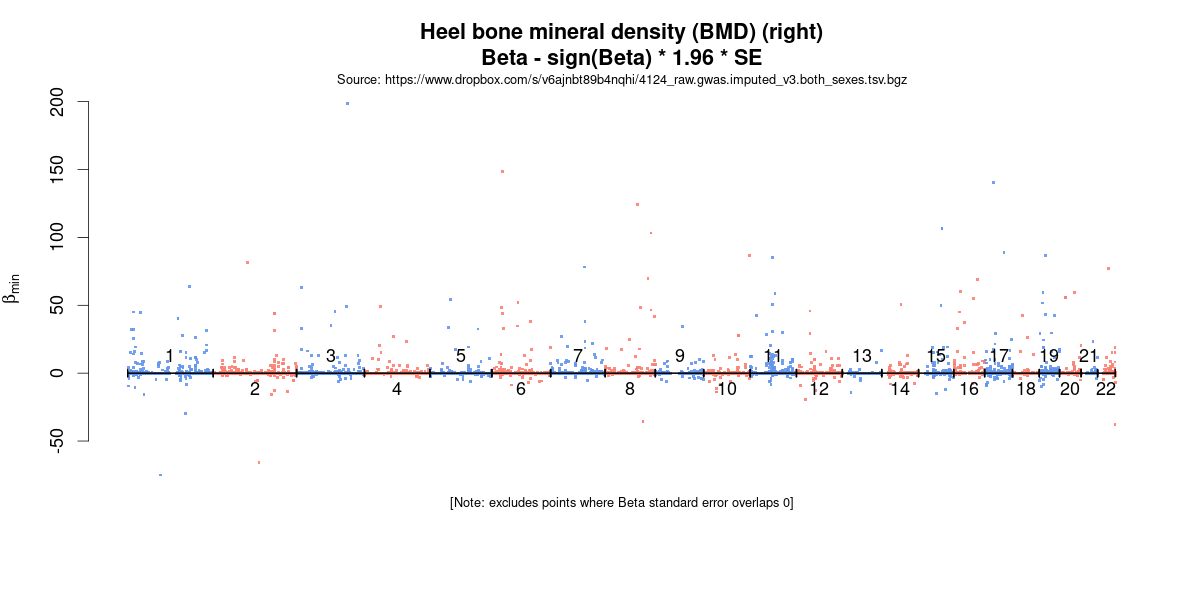 More rigorously, I think that people should consider doing their own internal validation of associations via bootstrap sub-sampling, and report a non-parametric statistic: the best observed rank after multiple bootstrap sub-samples. This requires access to genotype-level data, so cannot be done on existing GWAS results. I explore this in more detail in this preprint.

Yes, I'm aware this goes against the grain of how GWAS is typically done. I have been emboldened in my position on this after reading the ASA principles about the p-value, and seeing that many of the principles are in direct opposition to the typical manhattan plot:

Not the answer you're looking for? Browse other questions tagged statistics gwas or ask your own question.

6
Where can I find a GWAS data set about genotypes and phenotypes for Zebrafish and rice?
1
A basic question about phylogenetic inference with Bayes-MCMC
3
What is the state of the art for GWAS in terms of the statistical algorithm for either Case/control and Quantitative traits?
0
Is outlier detection the right choice for determining if a value lies singificantly away from the mean in a population in gene frequency?
0
P-value correction when evaluating correlation between gene and miRNA expression
1
Confirmation about PERMANOVA and Variance partitioning (permutest)
0
How is the t-statistic value calculated in GEO2R or Bioconductor?
0
Where can I find a basic example for testing association between a phenotype and each of the variants of a chromosome?