Variant vs Allele vs SNP

Coming from a CS background. Reading through the wikipedia page, these all sounds like the same thing: Variant, Allele, and SNP.

Variant/Allele/SNP: Some gene locus that differs from the idea human.

For example, if 99% of humans have a T at some locus, and you have a G, C, or A, then you have a Variant/Allele/SNP at that locus.

Is there intuitive way to explain the difference?

SNP = single nucleotide polymorphism, a type of variant. Here the alleles are just single bases, but other variants can be insertions/deletions of one or more bases.

Just to add on to previous answers, it is important that allele is one of the possible versions or sequences that can happen at a given position.

Take SNP. Most SNPs have two alleles, meaning that in the population we only see two possible nucleotides at this position. For instance, everybody either has an A or a G at this position. This type of SNPs are called biallelic.

In rare cases, a SNP can have three different alleles, like A/G/C. These are called triallelic. So already you can see that allele is different from SNP. They are actually completely different concepts.

Also, the word allele has been used for a long time. Scientists first used this to refer to a certain version of genetic variation at one place in a genome. This happened even before we know what is DNA. On the contrary, SNP was only discovered after we can sequence human DNA, which is basically in the past 20-30 years. Therefore sometimes it is hard to distinguish the subtle differences between these terms, because they can carry both original meaning based on primitive understand of heredity as well as newer meaning in the era molecular genetics. It might be helpful to think about what these term are referring to in different time and contexts. 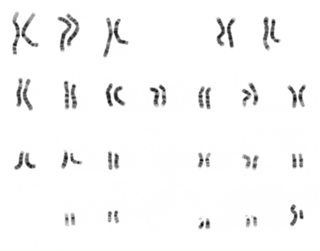 As you can see (if you squint) in the image, we have two copies of each of the 22. With the exception of the sex chromosomes, X and Y (seen in the bottom right of the image above), you have the same complement of genes on each of the copies of the chromosome. Traditionally, the term "allele" refers to the sequence of one of the two copies.

We inherit one copy of each chromosome from each of our parents. So, if you have inherited a mutation at position $Ψ$ of chromosome 21 from one of your parents, you will be "heterozygous" for that mutation. This means that of the two copies of chromosome 21 in your cells, one will have the mutant allele at position $Ψ$, and the other the wild-type (i.e. "normal", although that's possibly a misnomer) allele.

The term SNP is also commonly used to refer to polymorphic positions. This means specific, single base positions of the genome where variation is common in the human population. Having differences from the reference genome in such polymorphic sites is usually not problematic. The specific use of the term varies a little between subfields. If you're working on population genomics, you are likely to use SNP only for such known polymorphic sites, while others may use SNP to refer to any single nucleotide variant.

Which brings us to variant. This is a blanket term encompassing any and all forms of variation in a genome. SNPs are variants, but so are larger insertions or deletions (indels), copy number variants, large transposed sequences, the list goes on. You can basically think of variant as the catch all term used when you don't want or need to use anything more specific.

Not the answer you're looking for? Browse other questions tagged genetics or ask your own question.