miRBAseConverter is also like the mentioned one: It can not find the mature one for many miRNAs e.g. "hsa-mir-34" has to mature IDs: "hsa-miR-34a-5p" & "hsa-miR-34a-3p" but despite having them miRBaseConverter could not retrieve them. 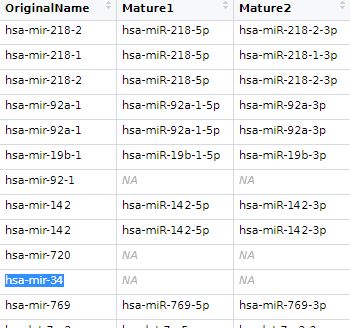 Can anyone suggest any tools that might help to do this?

Browse other questions tagged r biopython bioconductor computational-biochemistry or ask your own question.

5
How to map PDB chains to Uniprot IDs using API services
1
Hierarchial PCA Clustering with duplicated row names
0
How to map gene names to ensembl Ids in R
0
europmc and tidypmc R library for extracting or making metadata from publication
0
How can I match sequences with IDs using python dictionaries?
0
Annotating gene names or gene IDs to a dataframe containing SNPs?