What does 'Human Alternative sequence Gene' mean in Ensembl?

I have downloaded a dataset containing RNA-Seq RPKM (reads per kilobase per million) values for 52376 genes (in humans). To find RPKM values for the gene KIR2DL2 in the dataset, I have to search for it using its Ensembl ID.

After searching for this gene using the Ensembl browser, I obtain many results. 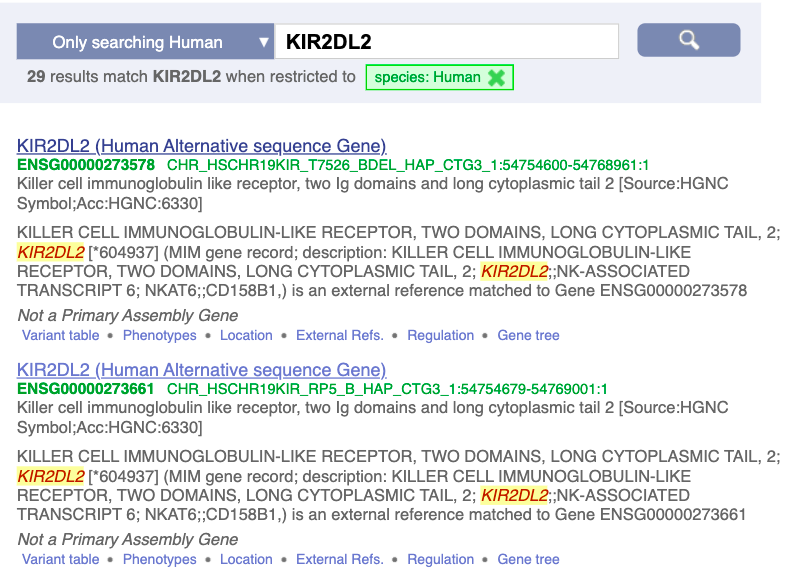 For all the results in the first page, it says Human Alternative sequence Gene after the gene name. When I have searched for other genes using their Ensembl ID I get only one result:

What does Human Alternative sequence Gene mean in Ensembl? I am not sure how to tell which is the correct Ensembl ID for the KIR2DL2 gene.

These are genes on the patches and haplotypes. Patches are repairs in the genome, where they have discovered the sequence or assembly is incorrect, so there is an alternative sequence that is created on top of the reference assembly (the reason they don't change the reference is that then there's a new reference and this causes a massive headache for everyone). Haplotypes are alternative versions of genomic loci that exist in some individuals, such as the MHC locus, which are different and common enough to require a proper assembly change, more than just genetic variants.

The genes that are found on the alt sequences are listed as Human Alternative sequence Gene. They are both real genes and correct for the gene name.

If the gene is on a patch (the location will include the word PATCH in its name) you should probably use the patch gene because the primary assembly gene may be dodgy.

It gets more complicated if you're working with haplotypes, as all the versions are correct. Most people take the easy option of using just the primary assembly, but if you're variant calling, it may be worth trying to determine which haplotype the individual has and calling against that. This is particularly true for highly variable regions like MHC, where there are genes only found on the alternative haplotypes and not found on the primary assembly.

There's more information about alternative sequences from Ensembl here. And here from the GRC.

3
Why do BLASTn and prokka not seem to be searching the whole fasta file?
6
Finding gene length using ensembl ID
4
Authoritative source on human cytogenetic regions?
2
CDS length for each human gene
0
Ensembl protein identifiers from different assemblies
0
How to map gene names to ensembl Ids in R
0
Synteny test and tools to use for mammalian organisms?
1
Why do I have missing values returned from getBM when converting Ensembl transcript IDs to gene names?