Understand this Kmer plot from Merqury?

The attached figure is generated based on Illumina reads from multiple individuals compared to genome assembly. Looks like there are a lot of kmers are reads only (grey colored). Also, a blue peak (2x kmers), does it represents high heterozygosity? GenomeScope gives 1.5% of heterozygosity result. But it seems the blue peak normally should be near the 70x on the x-axis 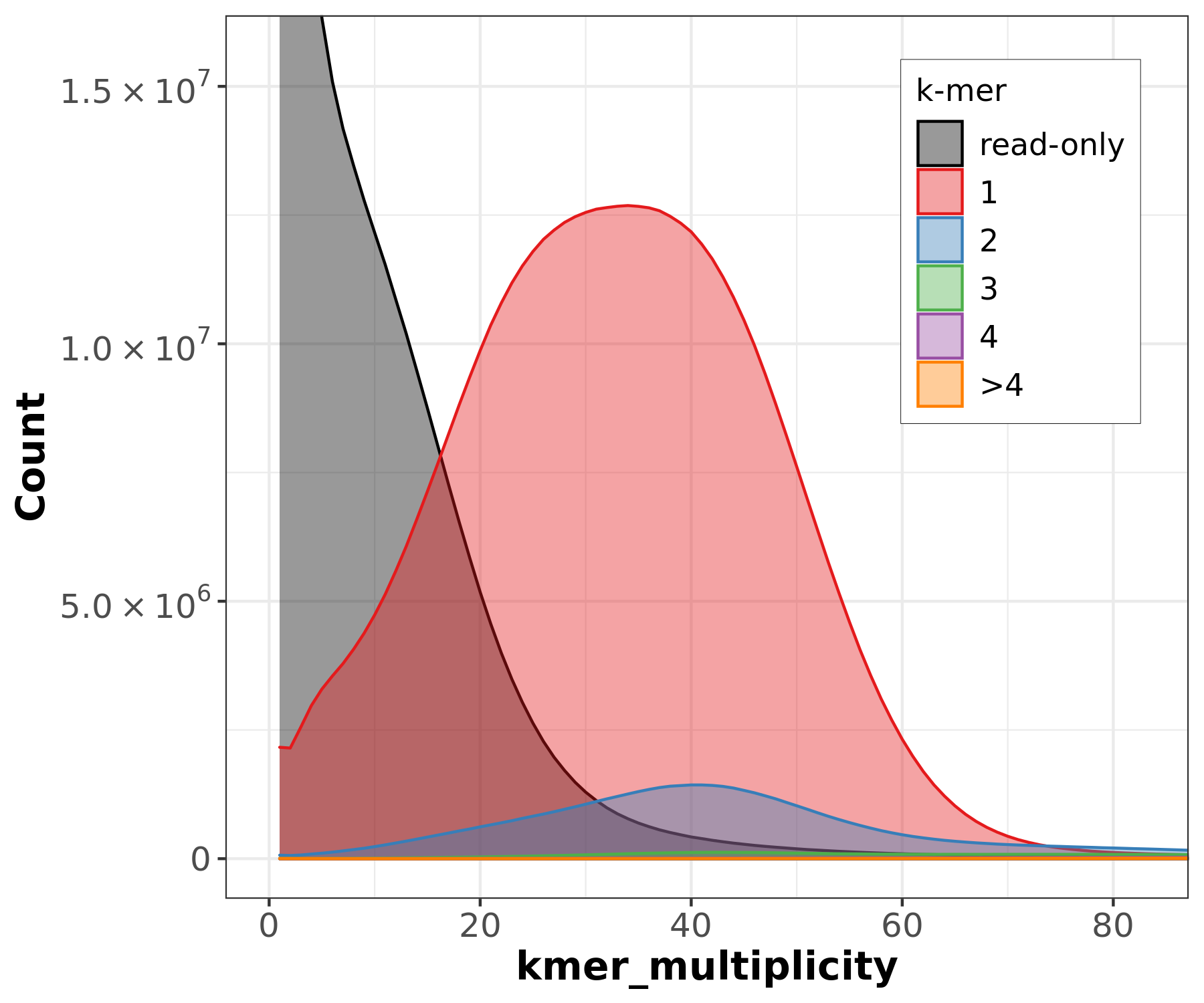 Assuming a diploid genome, usually, we aim to build a monoploid reference, representing a single haplotype.

Practically speaking, we need to include only one of the two k-mers that are representing heterozygous sites, however, we would desire all the homozygous k-mers to be included exactly once.

Looking at your plot, I would guess 1n coverage is somewhere around 18x, and 2n about 36x. If that's right, your plot is suggesting that your assembly contains lots of uncollapsed haplotypes, which is quite understandable given very high heterozygosity you estimated with genomescope. This is also supported by many homozygous k-mers are there twice (the blue bump). These are probably regions in between heterozygous sites, or flanking them.

Anyway, I would recommend something like purge haplotigs to collapse haplotypes into single monoploid reference and redo the plot. The blue bump should disappear and the black and red distributions should have about the same height around 18x, while nearly all the 36x k-mers should be red (once).

Also, if the interpretation of the plot still would not be clear, you can check this part of a lecture by Lucía Campos-Dominguez on the topic (it's a different software called KAT she talks about, but it is using the same principle as Mercury).

Not the answer you're looking for? Browse other questions tagged genome assembly illumina k-mer or ask your own question.

35
Why do some assemblers require an odd-length kmer for the construction of de Bruijn graphs?
8
How do kmer counters determine which kmer is 'canonical'?
9
How to get the count of each kmer past 255 using khmer
1
Obtaining identifier from plot of sequence GC%
8
estimate genome size: kmer-based approach from PacBio reads
3
Truble to run a multiprocessing kmer count script
0
calculating kmer nucleotide frequency per column
1
Comparing homozygosity of k-mer plots
1
DNA genome string reconstruction from k-mer