Link Prediction in Bipartite Networks between biological pathways and drugs

The values of that matrix are scores that describe the effect/relation of that specific treatment/drug on each pathway.

Now, some of the drugs is known to target specific disease (target disease) and thus is expected to have a high score with that disease's pathways. (A)

The rest of the drugs is known to target other diseases.(B)

My thought now is that, if I label the known drugs as "1" (or whatever), could I use a prediction model to find out new relationships (links) between drugs from the B class and the significant disease pathway from A ?

The whole thing, we can represent it as a bipartite network shown below. 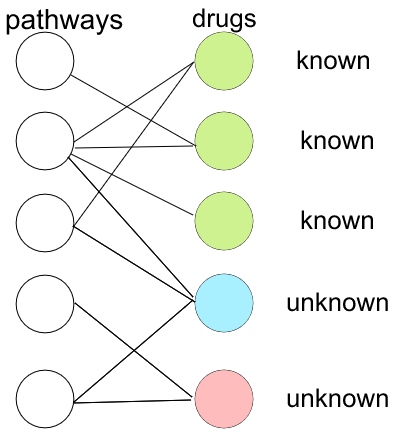 For example, here the denoted as green, drugs are the known drugs belong to the class A that mentioned before and they are connected highly with some pathways of the target disease.

From the other hand blue and red ones are drugs taken from other cases (class B) that are used to target other diseases, but as my plot shows, blue seems to has an "affinity" to some of the pathways of the target disease and thus should be an alternative candidate for that disease. The red from the other side, doesn't have any "affinity" to any significant pathway and thus we can not consider it as possible candidate.

To find a solution to that kind of problem, I looked for algorithms and methods developed for social networks (e.g recommendation etc.) and mostly I read about random walks with return.

But before to proceed, I would like to know if someone else tried such an approach here and having more experience.

I am not sure if I understood correctly how you classify the drugs. But what you attempt to do is similar to what they do here but in that article they use the drugs targeted to a molecule/pathway to find combination of drugs that are better for the disease (not an alternative drug), see the first image:

In that article they mention the pathway cross-talk inhibition (PCI), you might want to calculate it for your pathways to assess the relative reduction of the pathway efficiency.

Not the answer you're looking for? Browse other questions tagged networks pathway machine-learning modelling or ask your own question.

8
How to select the most representative pathways from a gene enrichment analysis?
4
How are PDO and PDX used in computational and predicative models for tumour biology?
3
Building network for biomarker interaction analysis
3
How to simulate biological pathways?
1
Motif Discovery in Bipartite networks using Cytoscape
4
size of the pathways for analysis and filtration
2
General framework for fusing biological networks
0
How do I perform a pathway related grouping of genes?
2
Generate ligands candidates based on protein shape
0
In Pygraphviz, How can I assign edge colors according to edge weights?