This is probably a long-shot since it would be so dependent upon the underlying folding algorithms. Are there known algorithms for mapping the path followed in a protein folding simulation when you have the starting conformation and the solution conformation such that you can count the number of steps involved in going from one to the other?

One way to get one of the many statistically possible paths is to start from the end and work backwards. This works with the maze puzzles on kids' menus, but also with proteins. To find how a ligand enters an active site, dynamic undocking uses tethered MD to pull a bound form out. Likewise for a protein folding starting from a folded state and lowering the attraction term of Lenard-Jones or gradually increasing the reference temperature used by the Berendsen thermostat in an MD run (as done for DNA annealing simulations).

This assumes that the system is reversible (not true for protein with a maturation step like GFP), but it is avoids getting stuck in local minima or dead-end paths in the case of maze puzzles. It also assumes that peptides start folding only once they are finished being synthesised, which is not true and actually circular permutations are an interesting case as many the permutation windows/spokes are unfolded.

However, the path down a folding funnel is more of a hike/roll down a canyon than a maze puzzles on paper as there are many possible routes to the solution. So having a bunch of trajectories makes a nice video, but does not say much... 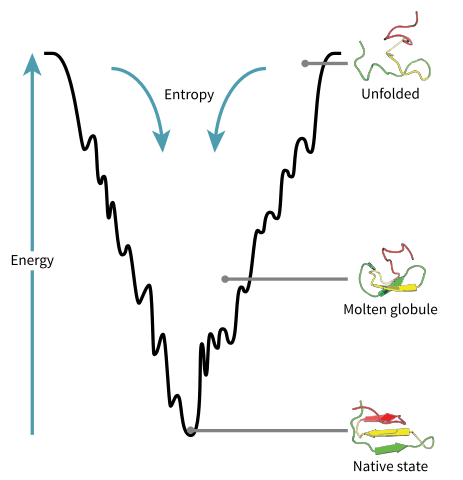 A seemingly similar concept, but very different, is the pathway reconstruction for the evolution trajectory that leads to a multi-mutation variant of interest. This is well studied because the intermediates are not transient but have to persevere in the population until another mutation appears. If they have a too high fitness cost they will not be around long enough for a compensation mutation (cf. epistasis).

I would say that the problem is defining each steps on your folding path, it is a continum, I don't know if you have seen one of those videos/gifs of a protein folding, they are quite illustrative on this aspect. Usually there isn't a clear step with a pause unless it reaches a local minimum, it could be possible to save that minimums with its folding but usually they take time and resources to calculates the folding process for a long time, so probably one ends up with just a few steps of the folding.

Not the answer you're looking for? Browse other questions tagged protein-structure or ask your own question.