I want to recreate the UGENE workflow proposed in Convergence of retrotransposons in oomycetes and plants. After being able to understand the data and hmmsearch Here and Here and getting most of the result I want to try to recreate the workflow in UGENE.

I manged to implement the workflow for the search 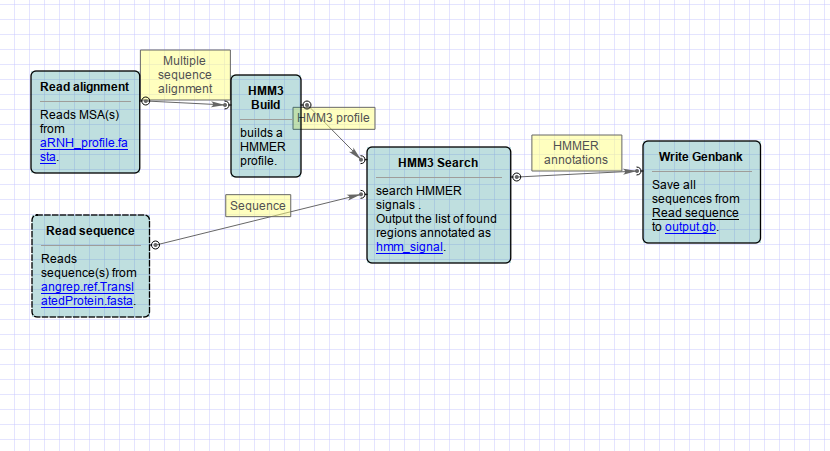 sequences surrounding the regions of significant similarity to the aRNH profile were expanded, when possible, to 10,000 bp in both directions

Third, the enlarged sequences were screened for the presence of significant similarity to RT domains of non-LTR-RTs and LTR-RTs HMM profiles using hmmsearch.

I assume it is very simmilar to the first step in building the right profile and running hmmsearch but the following steps are still unclear to me.

Browse other questions tagged sequence-analysis hidden-markov-models or ask your own question.

4
HMM Profile from Convergence of retrotransposons in oomycetes and plants
3
How to use the hmmsearch on prototypic repetitive sequences Repbase Update database?

2
Why PHMM is used For Protein Analysis
4
HMM Profile from Convergence of retrotransposons in oomycetes and plants
3
How to use the hmmsearch on prototypic repetitive sequences Repbase Update database?
5
What is the meaning of the Hmmer profile?
0
Python API for working with ENSEMBL genomes
4
Codon usage analysis for whole genomes
1
How to compute the Shannon entropy for a strand of DNA?
0
How to compute a p-value for the similarity measurement of two DNA sequences/contigs?