Doublets are a known problem with scRNA-seq experiments, where 2 or more cells are sometimes captured instead. To determine their presence, there are studies that mix multiple species (such as human and mouse) or distinct cell types and then count how many cells contain genes from the very different transcriptomes. In those experiments, you can pick any cell and determine if it's a doublet based on a few key genes. In a typical single-cell experiment on one sample, you don't have the luxury of knowing what cells to expect and if a particular cell looks abnormal.

If you have a large fraction of doublets, you should be able to see a double peak if you plot the number of genes/transcripts per cell. However, if you have something like 1% doublets, you probably wouldn't notice anything. It seems that most people simply filter out top X% cells based on the number of genes/transcripts. How do you know what X should be? Can you actually estimate the fraction of doublets in a given experiment?

I found a nice figure from Stoeckius et al. to illustrate the issue: 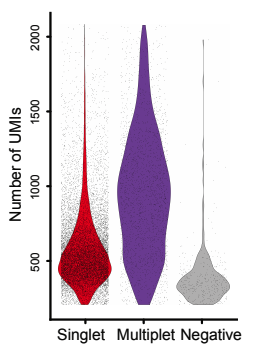 Although the number of transcripts/UMIs seems to be roughly double for doublets/multiplets (median of ~1000 vs ~500), there is still high overlap.

Detection and identification of doublets and multiplets

We cannot assume that doublets will produce more UMIs

I would caution the assumption that all doublets will have twice the UMI levels of isolated single-cells. Many "doublets" could contain multiplets of 3 or more cells, depending on how many cells have been loaded into the experiment. Most vendors of single-cell technologies quote multiplet rates for doublets, triplets, etc combined.

Furthermore, we cannot assume that the data from multiplet (doublet) cells is of high quality or produces comparable reads and UMI counts than we would expect from two single cells combined. Some tests of doublets (such as using mixed mouse and human samples) have found that the data generated from doublet droplets or nanowells has relatively low UMI abundance. This may be due to the protocols having been optimised for droplets or nanowells containing only one cell. Especially where tissue preparation is required this is a concern and is consistent with observations that doublet cells appear to be broken or contaminated with debris when they can be identified. This is highly dependent on the tissue you and working with, sample preparation, and the platform used to separate single-cells.

I have not been able to reproduce the above result using data from various species (using total UMI counts per droplet or housekeeper genes), although this is work still in progress. Even in the data shown, many multiplet samples have similar total UMI counts to the true single-cells. Therefore, they cannot be separated by a simple threshold (despite being significantly different). There have been several tools developed already for detecting multiplets (and filtering them out) but this is still an area of active development and there are more ways that these could be refined. In many single-cell analyses, arbitrary thresholds are being used to filter the data before further analysis and this may be inadvertently reducing the impact of multiplets if they have produced fewer UMI counts than single-cells for which the protocols have been optimised for.

Experimental protocols can be optimised to reduce doublets

If you have any insight into how these bioinformatics solutions to issues with multiplets could be used or improved I encourage you to pursue it. However, I suspect that the eventual solution to this issue is in optimising the single-cell NGS experiments for the sample type and platform that you are working with. Technology in single-cell 'omics is continuing to develop and any solution which produces more useful single-cell data than contaminants or doublets (that need to be removed), the more cells can be sampled at the same cost. There is a strong incentive for experimentalists and single-cell technology vendors to optimise this issue.

Not the answer you're looking for? Browse other questions tagged rna-seq scrnaseq single-cell quality-control 10x-genomics or ask your own question.