I got a dataset from C.Elegans scRNA-seq paper:

The dataset is 40 000 x 68 000, where rows represent genes and columns - cells. So, I took it and tried to process myself to build an scRNA-seq pipeline. Here is what I did:

After running the code above I decided to check whether the data is fine and so I ran:

I also ran PCA on the normalized dataset and it looks like that: 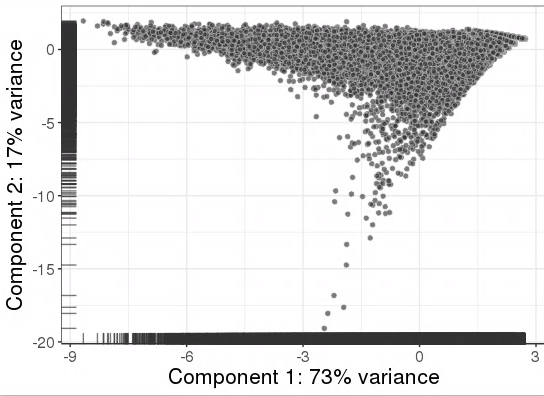 It seems to me that the normalized dataset is terrible and I need to do some further processing before I could run further analysis. What else could I do to improve it? How to filter it? There are no spike-ins and maybe 200 mitochondrial genes. The approach described here does not work, probably because the majority of the cells have low number of genes expressed: 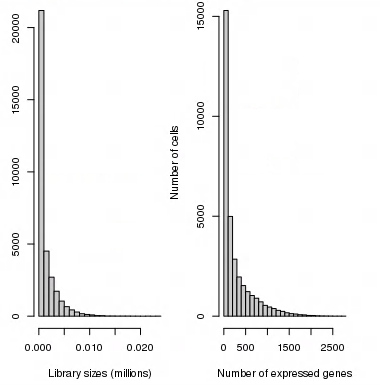 I tried removing low-abundance genes after normalization, but it seems that most of them are going to be removed:

Should I filter all of the cells - columns - for up to 500 total gene expression count instead of 100? Is it a good idea? I can't think of anything else.

I usually use a minimum of 200 genes/cell for relaxed filters (500 if possible). For genes I use presence in at least 10% of the cells.

A few other filters you can try are:

The best would be to compare all your samples using violin plots with those different filters and choose your thresholds from there. A quick example (using Seurat): 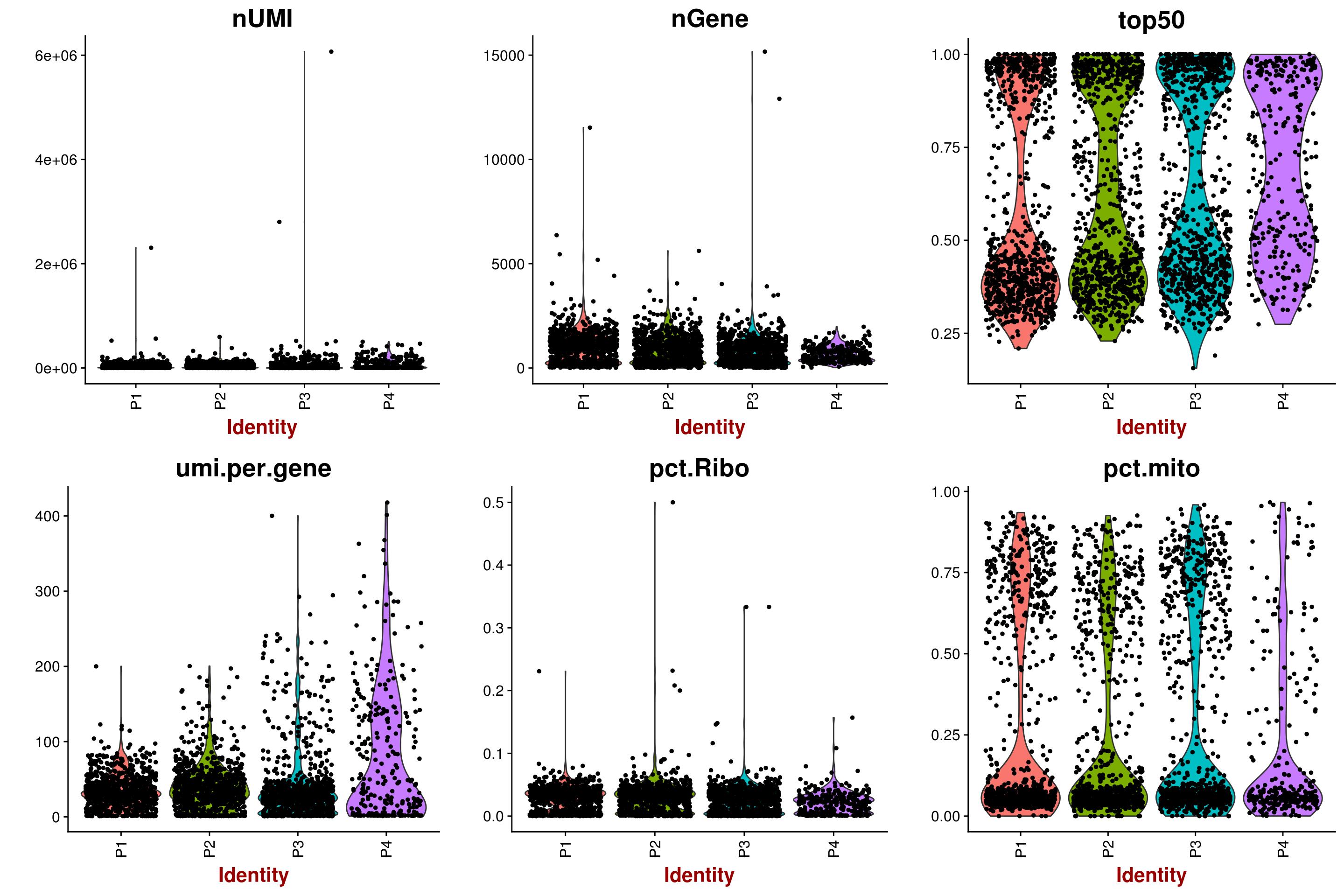 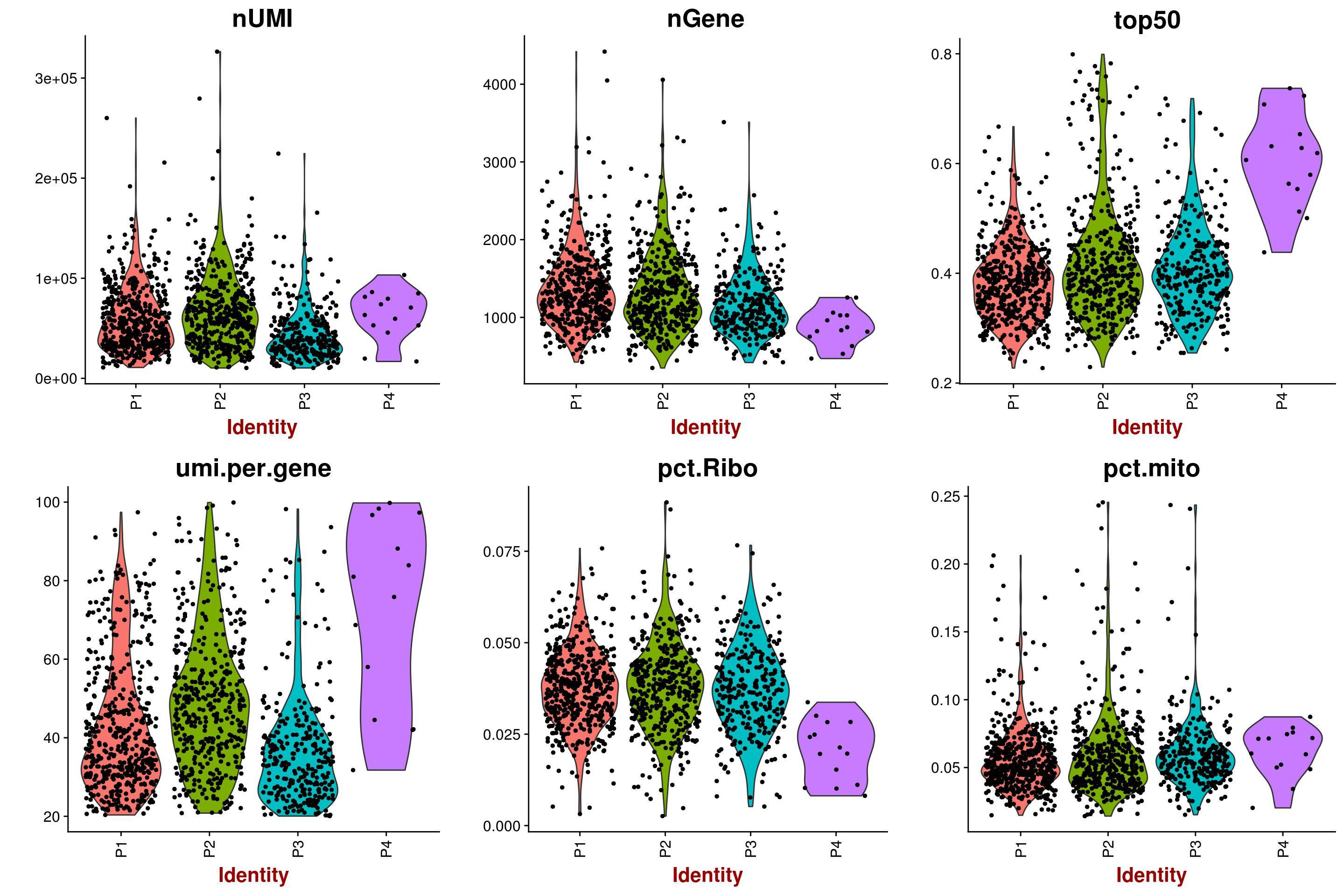 I don't think you can conclude that the dataset is terrible based on that PCA. Depending on the specific protocol, each scRNA-seq dataset is going to be very different. Unlike bulk RNA-seq where all the samples are going to be of very similar quality, individual cells will be highly variable. For example, the most basic QC metric is the number of reads. If some of your bulk RNA-seq samples have 10X more reads than other samples, that's a cause for concern. In scRNA-seq experiments, that's not at all surprising. The PCA exposes the major sources of variation. In scRNA-seq experiment, those are probably going to be technical rather than biological, so the output may not make much sense. Furthermore, even if all the cells are of perfect quality, PCA is not really optimal for sparse data with many dropouts like you see with scRNA-seq.

Regardless of PCA, those library sizes seem very small. Based on your plot, there are barely any cells with over 10K reads. I understand this is C elegans, but that seems somewhat low. That may be why you are having trouble with normalization. It would help with understanding the data if you changed the X-axis on those plots so that you can actually see where the peak is. Right now, it looks like 0, but that can't be the case.

Given that this is single-cell sequencing results, you should be using rowSums instead of rowMeans for filtering genes. Most genes won't be expressed at a single cell level, but there should be a lot of genes that have some expression. The zero counts are probably better represented as "missing" rather than zero.

Unfortunately that feature makes running PCAs difficult, because PCAs don't work with missing values. The missing values may need to be imputed in order to generate a better PCA.

disclaimer: I don't [typically] work with single cell data, so don't have a good handle on the methods for looking at it.

Not the answer you're looking for? Browse other questions tagged r scrnaseq scran or ask your own question.

6
Order of batch effects removal, data imputation and library size normalization in scRNA-seq data
6
Drawbacks of upper quartile normalization for scRNA-seq data
5
Assign cell types to groups of cells based on their gene expression profiles
8
Are mitochondrial genes to exclude in scRNA-seq such as ribosomal genes?
4
Is it possible to identify cells that are expressing two or more genes in Seurat?
5
No counts for added gene in cellranger (scRNA-seq)
3
Hemoglobin subunits genes in scRNA-seq
2
Any way to filter out highly correlated genes with limma linear model?
0
Keeping rows with a cut-off in all columns
2
scRNA-Seq pseudobulk for marker detection