I've been reading this paper lately:

I don't really understand the second paragraph under Quantification in the Online Methods section. I quote the author:

In an unstranded protocol, sequencing reads, and hence the k-mers they contain, may originate from transcripts in either the forward or reverse direction.

As far as I understand we are sequencing cDNA here and it is a single stranded molecule so all the reads will have the same direction (unlike the DNA where the reverse complement strand is also there), so I don't see the author's point. Can someone clarify please? Thanks.

I'll try to explain the concepts surrounding this with a nanopore read, where the cDNA component of the read (from the mouse genome) is indicated in a light grey, and the adapter components are either coloured or dark grey: 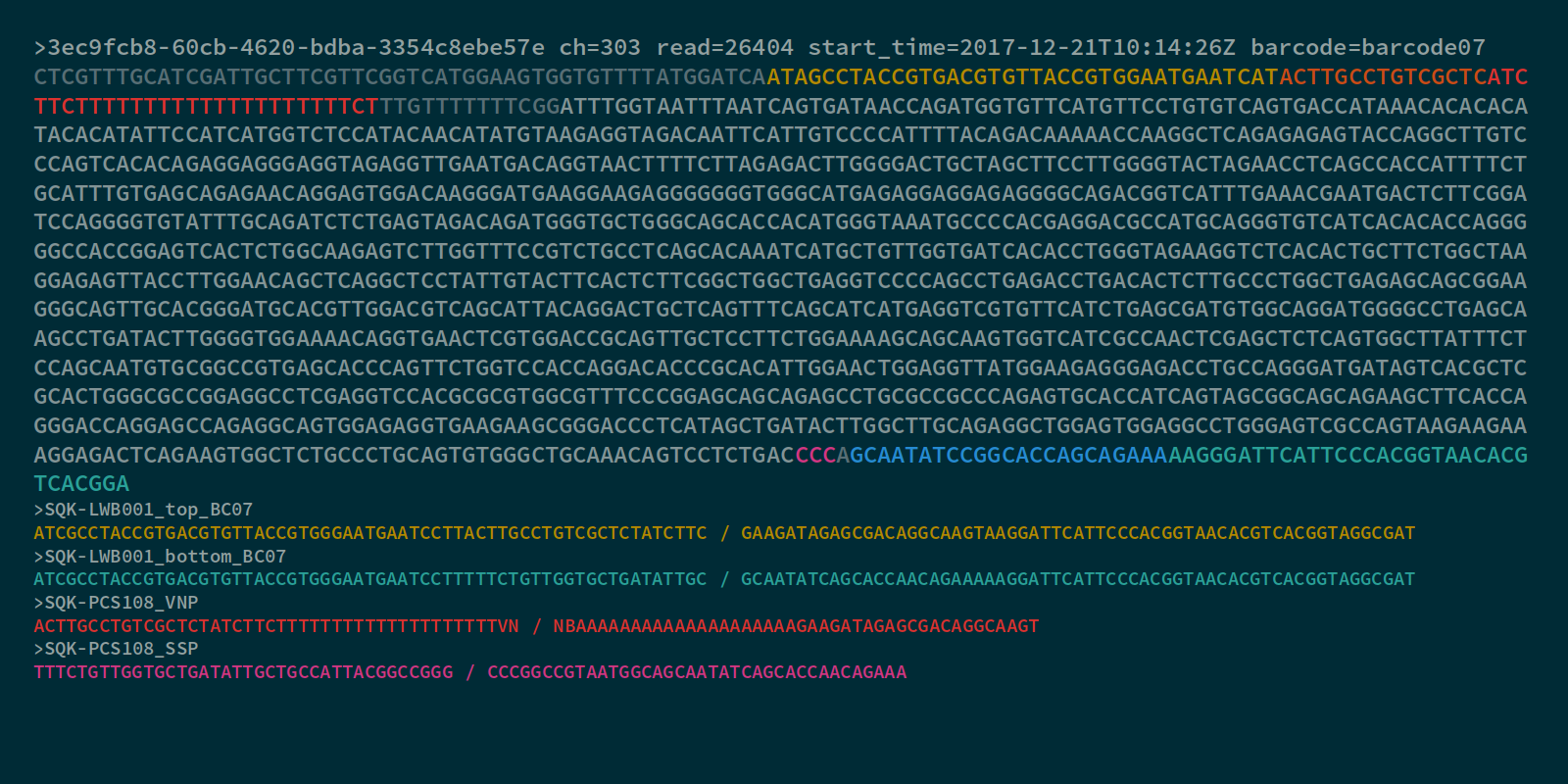 The cDNA library from this RNA was prepared by adding a polyT adapter (binding to the polyA sequence of the RNA), and carrying out reverse transcription to the start of the transcript. A strand-switching process was then used to prime and extend along the opposite strand of the DNA, creating a double-stranded full-length cDNA template. This template was then amplified using PCR to increase cDNA concentration and add in barcoding sequences.

You may notice that this particular read has a polyT head, rather than a polyA tail, attached to the VNP primer in the forward orientation. I can tell by this feature that this read comes from the reverse-complement strand of a DNA transcript, and so I know that the actual RNA transcript sequence is the reverse-complement of this read. Both the forward and reverse-complement sequences could potentially come through in the sequencer, because the adapters for sequencing are attached to both sides of the cDNA template, but the transcript direction can still be determined by looking at the orientation of the adapter sequences. When mapping this sequence to the genome, only a single strand (and its associated set of kmers) needs to be considered.

When considering what happens after mapping to the genome, there are four possible match situations:

If I were to use an unstranded protocol (e.g. generating a cDNA library through other means, and attaching adapters randomly to the forward or reverse transcript strand), then the adapter direction wouldn't give me information about which strand this sequence came from. I would need to consider both strands when mapping (or more correctly, when identifying the native direction of the originating transcript), because the adapter sequence has been decoupled from the transcript direction.

On Illumina systems, this strand direction calculation is performed via the chemistry on the flow cell, and the adapters are [usually] not sequenced by the sequencer at all. Adapters from one direction bind to complementary sequences on the flow cell and are extended to produce the first read, and adapters from the other direction bind to produce the second read. Even with a stranded protocol, adapters from both directions are bound (because the cDNA template is double-stranded), but the binding order (as first or second read) can be used to determine the native direction of the originating transcript.

There are a number of library preparation methods out there. Some, like the popular dUTP-based methods, result in libraries where the orientation of a read's alignment confers information regarding the strand of the transcript from whence it came. Other protocols do more PCR cycles and don't use dUTP to allow distinguishing strands. These are then termed "unstranded" libraries and one can no longer determine the strand/direction of the originating transcript from the orientation of a read's alignment. In general, a transcript will then have reads pointing in both directions in more or less equal proportions.

You tend to not see unstranded libraries much any more. Early on they were significantly more expensive, but that's not really the case any more. There also used to be two types of stranded protocols, whereas you mostly see dUTP-based protocols these days.

BTW, you'll see these same settings in most RNAseq programs. The equivalent to an unstranded protocol setting in featureCounts is -s 0, in tophat2 it was --library-type fr-unstranded (no one should use tophat2 any more, it's just an example) and so on in other programs.

Not the answer you're looking for? Browse other questions tagged rna-seq k-mer or ask your own question.