How are Principal Component analyses and Admixture analyses from a genetic alignment different?

How are Principal Component analyses and Admixture analyses from a genetic alignment different?

My understanding is that a PCA will take raw genetic differences across the entire alignment and plot them using dimensionality reduction techniques (single value decomposition for instance) whereas the Admixture analysis will plot likelihoods of sharing certain amounts of ancestry, based on allele frequency data. What I don't understand is how the two are fundamentally different. That is, isn't every variable position found in a PCA going to represent an allele used in Admixture?

The fundamental difference lies mostly in the math.

An admixture analysis involves assuming that genotypes (or more likely, genotype likelihoods) in an unknown sample can be modeled with Hardy-Weinburg equilibrium as arising from the combination from two or more source pools of background variants. The output is then an admixture proportion that dictates the mostly percent contribution from each of the source populations (e.g., 23% Irish, 15% Norwegian, 30% Northern African, ...). There are versions of this specifically for handling pecularities of NGS datasets.

A PCA is a very very generic method that uses the same input allelic information, but simply finds orthogonal projections of that onto lower dimensions that maximize the variance on the first principal component. You've probably seen plots like the following (from this paper about 1000 genomes projects data): 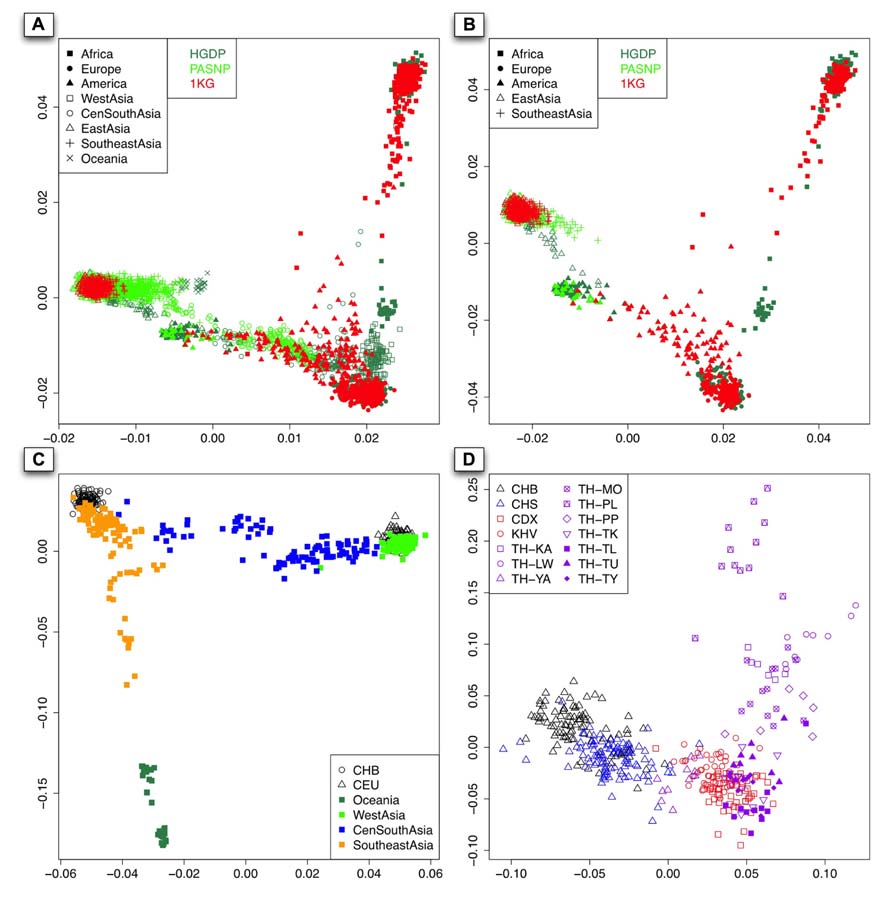 That allows you to get an idea about how populations are structured, but they're not so useful for determining how individual samples are most likely related to the various populations.

Just to add to the great summary by Devon Ryan: admixture analysis tools are much more flexible than PCA (which is just a fixed mathematical operation), so they can be designed to incorporate LD patterns, phase information, different population evolution models etc.

Here's a paper from the creators of fineSTRUCTURE and Chromopainter admixture tools detailing the action of both - it seems they provide some comparisons with PCA as well: http://journals.plos.org/plosgenetics/article?id=10.1371/journal.pgen.1002453

Not the answer you're looking for? Browse other questions tagged alignment pca or ask your own question.

2
How is a principal component analysis for population structure made from a bam or other alignment file?
4
How does Li and Durbin's BWA paper compare alignment programs on real data?
5
How to get fasta alignment file from SAM/BAM file?
2
Calculate genome coverage and depth from alignment