I am trying to find over-expressed motifs in a bipartite transcription factor gene network.My genes are not very well characterized, so finding functional motifs has been a challenge. I used the motif-discovery app on Cytoscape and calculated the total number of 3 node motifs on the network. In my network, where transcription factors regulate genes, the only kind of three node motif that is possible is a simple input module. 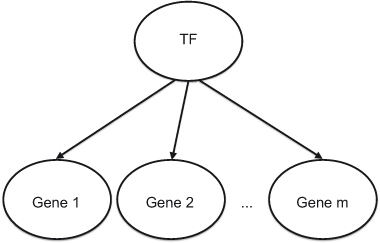 I further created random networks to my real world network and statistically (Student's t-test) proved that there are more number of single input modules in the real rather than the random network. However, I am just not feeling satisfied with just this one explanation because I would have like to draw some biological inference from this. I was thinking of also analysis the 4 node and 5 node motifs in the network, find the number of times any of my hub nodes occupy a single node of these motifs and maybe use that and prove the importance of my hub nodes (though hub nodes are worthy of more exploration just by virtue of their high degree). Has somebody done something like this previously. It is a given that hub nodes would be part of the maximum number of motifs just by virtue of their high degree and connection to multiple genes. So would this prove to be redundant?

Thank you in advance for any help that could be provided.

I have recently develop an R package (sorry not a Cytoscape solution) to deal with this kind of situations of something grouping other elements, like pathways and genes.
The package is based on GSEABase of Bioconductor to store this relationships. Basically you should store a gene set for each TF and genes it is linked. I would recommend to use the name of the TF as the name of the gene set and then create a GeneSetCollection to be able to use the package.

The package provides with functionalities that allow you to calculate the distribution of genes per gene set (using genesPerPathway), as well as, pathwaysPerGene to know in how many other TF regulate each gene.

I am not sure of the biological inference you can take from this (I designed the package to test this) but you can also see if there is some specific preference for the TF to link to genes which are also regulated by other TF. This could be done by looking at the conditional probability (condPerPathways or sizesPerPathway).
Sorry the manual pages don't have examples and the vignettes are incomplete yet.

Also you could use the package tidygraph to calculate the centrality of the TF or of the genes you want.

Not the answer you're looking for? Browse other questions tagged networks motifs or ask your own question.

7
What motif finding software is available for multiple sequences ~10Kb?
2
Link Prediction in Bipartite Networks between biological pathways and drugs
3
De novo motif discovery in protein sequences
4
Error while loading a big file with Cytoscape
1
Random networks in PPi
1
how to evaluate neural networks
1
Why does randomized motif search work?