Why are there more barcodes than GEMs in 10X chromium data?

Question: Why are there more barcodes than GEMs in 10X chromium data?

I have several 10X genomics chromium libraries made with the de novo assembly/genome protocol. The 10X chromium device is advertised to produce approximately 1,000,000 GEMs (gel-emulsion droplets). In theory each GEM should have a single barcode that is used to track the provenance of each read pair. If this is true, a single library should have approximately one million barcodes, whether or not it was overloaded or underloaded.

Why this is a problem

I'm using the 10X data for some non-standard analyses and want a high number of LinkedReads per molecule (LPM). Having multiple barcodes in a GEM will reduce the number of LPMs per barcode proportional to how many barcodes were present in the GEM.

I don't know how to test hypotheses 1, 2, & 3 bioinformatically. Hypothesis 4 is testable though by making a histogram of read counts per barcode. To do so, we will use the output of longranger basic for Lib2.

Longranger basic outputs an interleaved fastq.gz file that contains the whitelisted barcode in the header. For example (pretending the reads are shorter than 150bp):

So, we can count the number of occurrences of each barcode with this code: 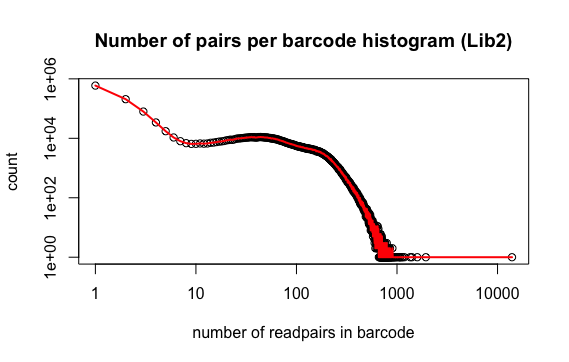 It looks like every barcode with fewer than 10 read pairs may be noise. How many barcodes contain at least 10 reads?

This analysis doesn't give conclusive evidence for the four hypotheses above, but it seems like there is a noise-generating process in 10X data that causes there to be many barcodes with only a few readpairs.

Your initial guess is almost certainly correct. I don't know about the linked read libraries, but in the 10X single cell sequencing protocol, separating real barcodes from noise barcodes is an important and sensitive step in the analysis pipeline.

The current analysis pipeline is to look at a plot, like the one you produced and find the "knees". The plot you produced has two knees, on at around 10 and one at around 200. I'd guess that the ones below 10 are what we call "error barcodes" generated by sequencing is PCR errors from real barcodes, and the ones between 10 and 200 are what we'd call "background" barcodes - in scRNAseq they represent things like GEMs that didn't encapsulate a cell, but did encapsulate some non-cellular DNA or RNA.

As there are more than 1,000,000 possible barcodes, not all of them are used. I believe 10X knows which sequences are used and which are not (ie the barcodes are not random), so I'm surprised that these sequences make it out of the other end of the analysis.

Not the answer you're looking for? Browse other questions tagged sequencing illumina 10x-genomics barcode or ask your own question.

4
Why are there missing calls in a VCF file from exome sequencing?
4
10x Genomics Chromium single-cell RNA-seq data analysis options?
4
Can I stop my nanopore sequencing run if there are no more reads being produced?
3
Relationship between sequencing lane and ngs dataset
3
How many reads do I need to cover the entire genome?
7
What is the correct way to map Hi-C data with bwa mem?
5
Script to allow gene set enrichment analysis of 10x genomics data in R
4
Are there any Genome in a Bottle-like resources for non-humans (especially for invertebrates)?
2
Why do I have >10,000 cells in the 10X matrix produced by cellranger?
4
High percentage of poly A sequences in 10X chromium R2 read