What is a site in a phylogenetic tree?

When I read about a term related to phylogenetics, for example, $K_a$/$K_s$ ratio, I constantly see the word site, whose meaning isn't explained and it puzzles me.

Could you define a phylogenetic site? 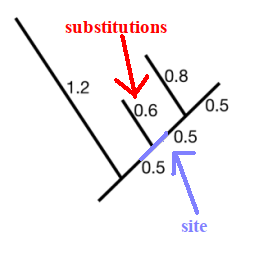 phylogenetics phylogeny terminology
Share
Improve this question
edited May 8 '20 at 14:15

A site is simply an individual discrete position, normally a single nucleotide (or amino acid). For example, consider a toy alignment:

Here there is 1 mutation in 4 sites, so 0.25 substitutions per nucleotide site.

I'm not sure where the term originated, but probably one of the earlier definitions is from renowned population geneticist Motoo Kimura, who simply stated in 1968:

In this paper, “site” refers to a single nucleotide pair

A pair in this context, means either a homozygous or heterozygous site.

Thus, the ratio of Ka/Ks (or Dn/Ds) is thus often used as a crude proxy of selection, with Ka/Ks < 0, Ka/Ks = 0 and Ka/Ks > 0 implying purifying (negative) selection, neutral evolution and positive selection respectively. Note that this assumes the neutrality of synonymous sites, which is increasingly questioned due codon usage bias and regulatory elements overlapping coding regions (and also ignores mutational biases and biased gene conversion, although these can be accounted for in an evolutionary model, and also assumes no sequencing errors and perfect alignments, which can impact a lot on the results too).

Not the answer you're looking for? Browse other questions tagged phylogenetics phylogeny terminology or ask your own question.