I have around 100 chromatograms (.ab1 files) from Sanger sequencing a genome at loci believed to have an indel.

I'm new to interpreting this kind of data in general, but I've read a bit on the general idea—mostly in guides like this. What I'm not able to figure out from the resources I've checked is how to identify insertions and deletions in a chromatogram.

In other words, something like the top track in the open window in this image. 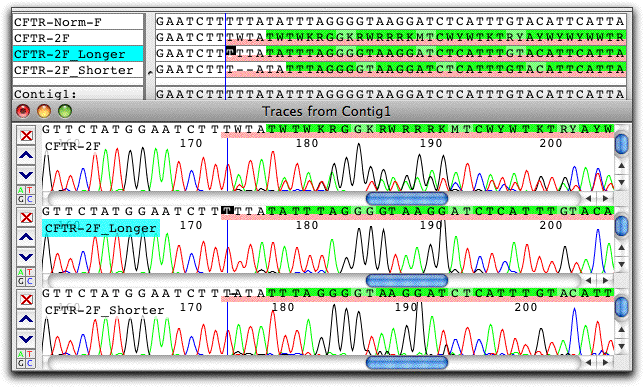 (I'm trying to do this manually, and not with packages like this for several reasons, including: I want to see how this is actually done, I want to do it as thoroughly as possible—I will probably check my results with an automated package—and I was asked to do it like this.)

How can evidence of (het) indels like this be distinguished from noise in the chromatogram? My guess is it includes things like

With my own chromatograms, I have a lot of doubt about distinguishing noise from indel. Here's an example, visualized with 4Peaks. (Full chromatogram here.)

On the left, the chromatogram appears high quality. There are sharp, regularly spaced, single peaks. On the right, there appear to be two sets of peaks lined up with each other. Does this constitute evidence for an indel? Does the homopolymer region—I've noticed in many of these samples, the putative indel seems to start in a homopolymer region—cast doubt on this?

I've also noticed that in some situations like this, there appear to be not two but three peaks. 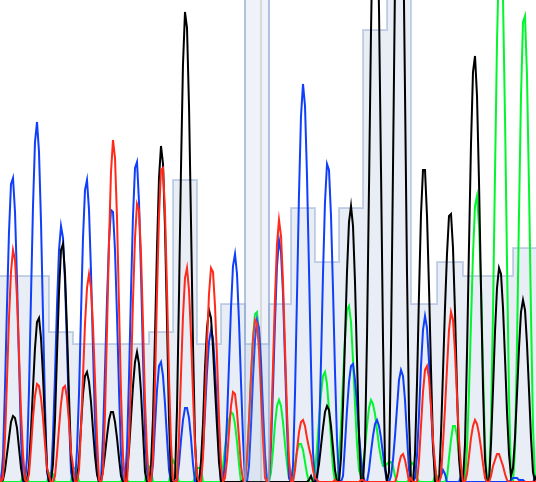 Is one of these just noise and can be disregarded? Or does this cast doubt on the validity of the data—which is supposed to be coming from the diploid human genome?

If you want to call heterozygous SNPs and INDELs, you may try polyphred. I believe there are a couple of other similar tools, but I have forgotten their names.

How can evidence of (het) indels like this be distinguished from noise in the chromatogram?

Your two points are correct. Basically, at some position, you start to see two streaks of overlapping peaks. Once identified, the two streaks can be aligned to each other if you shift one of them. This is a strong constraint, but it is hard to tell by eye because it is not obvious how to assign peaks to streaks without running an automatic tool. Doing this is even more difficult given noisy traces like your last figure. I think you'd better run polyphred or similar.

the putative indel seems to start in a homopolymer region—cast doubt on this?

The INDEL mutation rate in long homopolymer runs is orders of magnitude higher than elsewhere in the genome. This has two implications: 1) you expect to see more homopolymer indels; 2) PCR polymerase is more likely to introduce errors in homopolymers––a higher fraction of homopolymer indels tend to be wrong.

to understand how to interpret sanger sequencing chromatograms I'd like to give a brief introduction to how this data are generated (sorry, if you already know this)

The target region is amplified by PCR. The following sequencing reaction is quite similar to a PCR, despite two important differences:

The result of this reaction are single stranded DNA fragments of different length. The last base is fluorescence labeled. So we have fragments that looks like this:

Of course there a many copies of these fragments.

Now these fragments are separated by capillary electrophoresis. Small fragments are detected first. We can differ the several bases by its fluorescence color.

What happens if we had on the second strand a SNP?

Now the sequence would detect two signal of equal intensity on base 3 - one for C and one for A. This have two effects in the chromatogram.

Let's see what happen in case of a heterozygous deletion. An alignment would look like this

But our capillary electrophoresis doesn't know about alignment. It only knows about fragment length. So this is what it will detect

With the beginning of the deletion it will detect to different signals. Just like in case of the SNP, the relativ signal intensity is now just about the half.

With this knowledge let's go back to your initial questions:

How can evidence of (het) indels like this be distinguished from noise in the chromatogram? My guess is it includes things like

They don't start at the beginning, if your indel is not right after the primer, correct. In case of an insertion or deletion you have strands of different size. So if your target region is quite small you may have luck, that you can see the end of the overlap at the end of the sequence, because the shorter strand reaches its end.

Yes. And one of the best things to distinguish between noise and true heterozygous variant is a relativ drop off of the signal intensities by approximately 50% compared to homozygous samples.

Concerning your second chromatogram: This is not an indel. As the other already said, this is a mistake made by the polymerase. Invitro polymerases doesn't like homopolymer stretches. They begin to add extra bases or "forget" one. As we do PCR this error accumulates. In my experience up to 9 time the same base is not a big problem, 10 only if you have luck, from 11 upwards your sequence are terrible. If you are interested in the sequence part behind this stretch, you have to sequence from the other direction.

Sanger sequencing produces a bit of messy signal at the start and a lot at the end of the sequence, but should have a region of clean signal in the middle. If the signal is getting mixed up in the middle, it suggests that there are sequences that are out of phase with each other. That could be a heterozygous INDEL, but it could also indicate that multiple template sequences have been amplified by the same primer.

Sanger sequencing is frequently carried out in both directions (forward and reverse complement), and if similar things are happening in both directions at the same place, it makes it more likely that there is a heterozygous INDEL and not something else funny going on. It's a very good idea to have homozygous templates for all expected variants, if possible. If the secondary peaks in the signal match what is observed in the homozygous variants, that can also be used as evidence. In the absence of control sequences, it is also possible to eyeball the peaks to find self-similarity.

Where triple peaks are seen, that could point to a region where there are two INDEL variants in close proximity, or multiple regions getting amplified at the same time, or even a single INDEL variant with more than two variant states (e.g. a homopolymer with 8 As that is sometimes 7 As, and sometimes 9 As).

Honestly I would not try to call heterozygous indels with Sanger sequencing. It's just not the right technology.

If you were trying to confirm a known indel that didn't flank a homopolymer stretch, and you had sequence from the other side that got messy at exactly the same point, maybe you could safely conclude there was something going on there, and possibly you could eyeball the exact right sequence of mixed peaks, but I don't see that what's what you have in your examples at all. It just looks like noise.

There are specialized tools to deconvolute (separate) heterozygous InDels in a chromatogram trace using a reference genome. For instance, Indigo is a web application for this, the command-line application is called Tracy.

One important point that @gringer briefly touched on is that there is often off-target amplification when performing PCR on whole-genome DNA.

So, the noise in the chromatograms very well could be from another part of the genome and not related to indels at all.

The only way to ensure that this is not a problem is to clone your PCR products into a vector, transform into something like E. coli, grow up a single colony, cut the product with restriction enzymes, size-select, then sequence the correct-sized insert. Or you could just re-sequence your PCR product with Illumina or PacBio to accurately sequence the complete population of molecules -- indels and all. Check out:

The safe thing to do is to not read too much into the noise of Sanger chromatograms unless it is a simple and very clean SNP.

7
How can I speed up INDEL calling/correction on BAM files?
6
Genome assembly from error-prone reads
4
Keep Format and Individual fields when annotating VCF with VEP
3
Alignment with arbitrary number of mismatches or gaps
2
Knowing which positions are variants
4
Remove variants that do not map to human genome
0
Supplementary aligments in VAF
3
Sequence allignment with suffix array?
0
How to Find List of Genomic Coordinates from List of Genes using UCSC Website?