I got a PCA plot of bulk RNA-seq experiment that looks the following way: 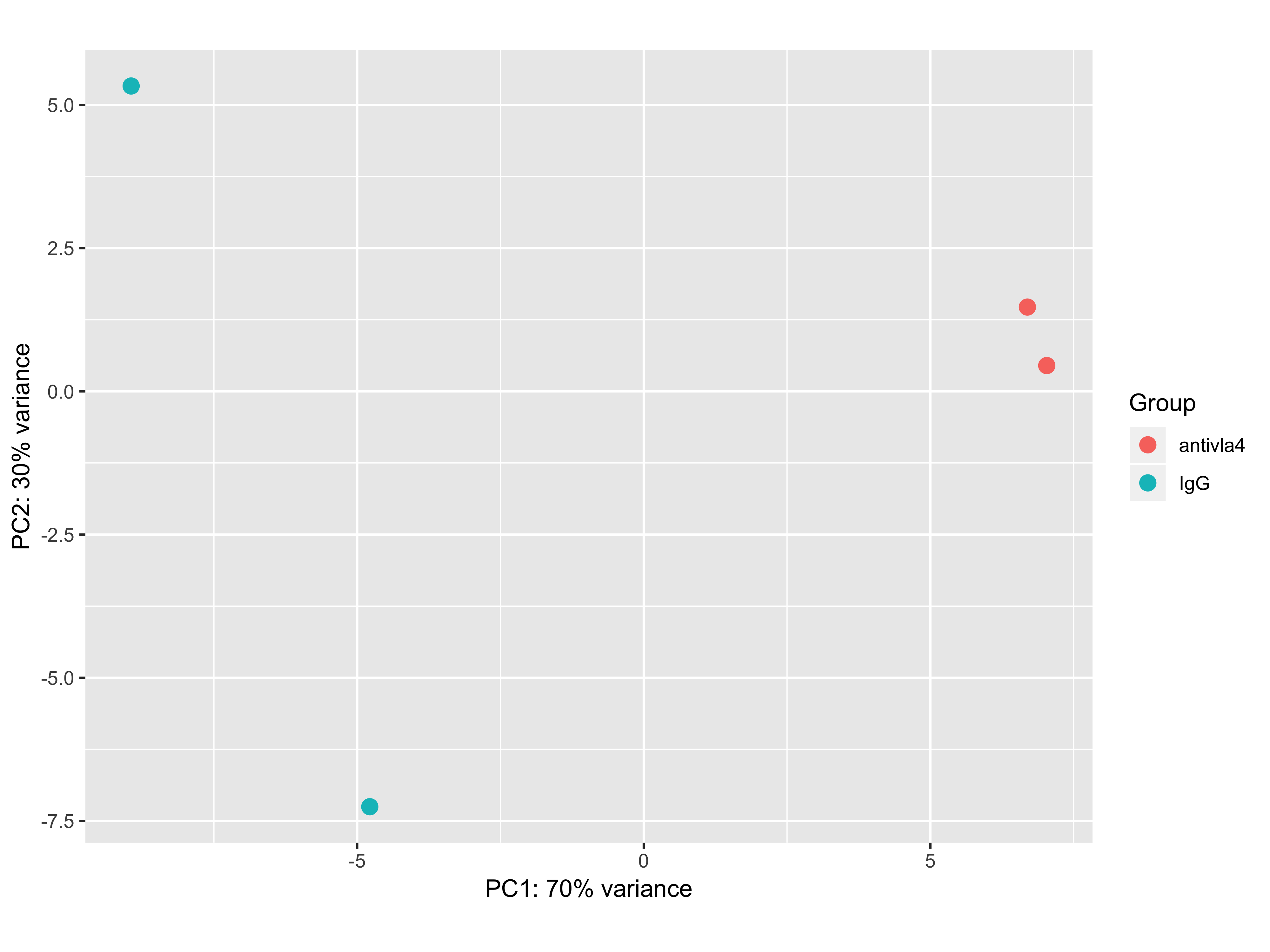 It was generated by the following code:

First sva correction was run to correct for batch effects and then rlog transformed values were plugged in to plotPCA function.

You only have 4 samples total. I think it would be difficult to not have the PCA show big differences between the groups with so few points.

On the other hand, for differential expression, it is hard to get something to be statistically significant with only 2 replicates.

While this result isnt what you expected, it communicates important information about the differences along phenotype (i assume) and across replicates. PCA plots create x and y axis that represent aggregated features that account for the greatest variation, the x axis is the direction of maximal variation represents a group of genes that account for highest aggregated variance values. You can usually dissect the PCA command to find the loading (the genes used to create the axis' arbitrary unit of measurement). The loading of PC1 (x axis) are genes that separate the two groups along categorical groups in an unsupervised clustering technique, this is great in an analysis with substantial samples as determined by a power analysis that includes predicted effect size which need to be done in preparation of the experiment to guide the protocol. When the loading of an axis is due to a small number of genes that suggests that the variance for those genes is very large. Again this is great if the experiment is performed with an appropriate sample. For PC2 the next greatest direction of maximal variation separates replicates and can be interpreted as indicative of the genetic diversity across a species responsible for the unique traits of individuals. These differences are far more pronounced in group 1. The suggests that the gene expression values across replicates of group 2 will yield a significantly higher correlation coefficient than those in group 1. Unfortunately this is not an appropriate sample size for any analysis really. Even the standard 3 sample comparative analysis is a statistical nightmare. PCA plots can effectively communicate magnitude and directional cohesion (or lack of cohesion) of the salient differences between groups and samples from experiments that include measurement of features in high dimensional space which is the reason they are so prominent in bioinformatics.

This plot is actually astounding as well or it would be for adequate sample numbers because PC1 indicates that between your two phenotypes or groups the are a small number of genes that account for 70% of the variation. If you repeat this experiment with greater number of samples and it yields similar results those genes that load the PC1 axis would be prime candidates for biomkarers that differentiate whatever condition you are studying and should be in vivo validated and even analyzed for potential causality.

Part of the reason that you have so few differentially expressed genes is because of your protocol as well. SVA is a surrogate variable analysis that eliminates potential lurking variables by identifying covariates or features that may yield false positives due to uncontrolled consistencies or biases between flowcell lanes, technician performance, time to perform the experiment. If you failed to employ SVA you would have significantly more differentially expressed genes but they would be potential false positives and should be interpreted as low confidence positives. Having performed SVA before PCA suggests that there is high confidence in the role of the several genes responsible for the greatest differences across the two conditions. Unsupervised clustering techniques require some understanding of the basic concepts of linear algebra. MITOCW has a fantastic free course by gilbert strang that would help you to more accurately interpret these types of plots as well as many others like MDS plots, heatmaps, and dendrograms. The URL of the course and its free textbook are included below.

I like Rbloggers tutorials on these subjects usually but so many good ones currently exist.

I hope this helps.

Not the answer you're looking for? Browse other questions tagged scrnaseq deseq2 pca or ask your own question.

18
Understanding DESeq2 design, contrast and results
5
What are the ways to process a list of differentially expressed genes?
5
How can I specify to DEseq2 to only perform comparisons on which I am interested with?
2
Why do I obtain very strange results with DESeq2?
1
Discordance in gene signature behavior between bulk and single-cell RNASeq
3
Differential gene expression bias due to effect of an individual sample
0
PCA plot did not work in single cell RNA-seq
2
Differentially expressed genes analysis in Seurat
1
What is a sensible number of gene/observations to explain PCA variance?
0
Help with performing PCA analysis on data from 3 different datasets of normalized counts data for RNA-seq experiment