I want to ask about why the sequence duplication levels are high after I trimmed by using Trimmomatic? I am using the following Trimmomatic operations: HEADCROP = 19 TRAILING = 20 MINLEN = 66.

How can i solve this problem? Thank You. 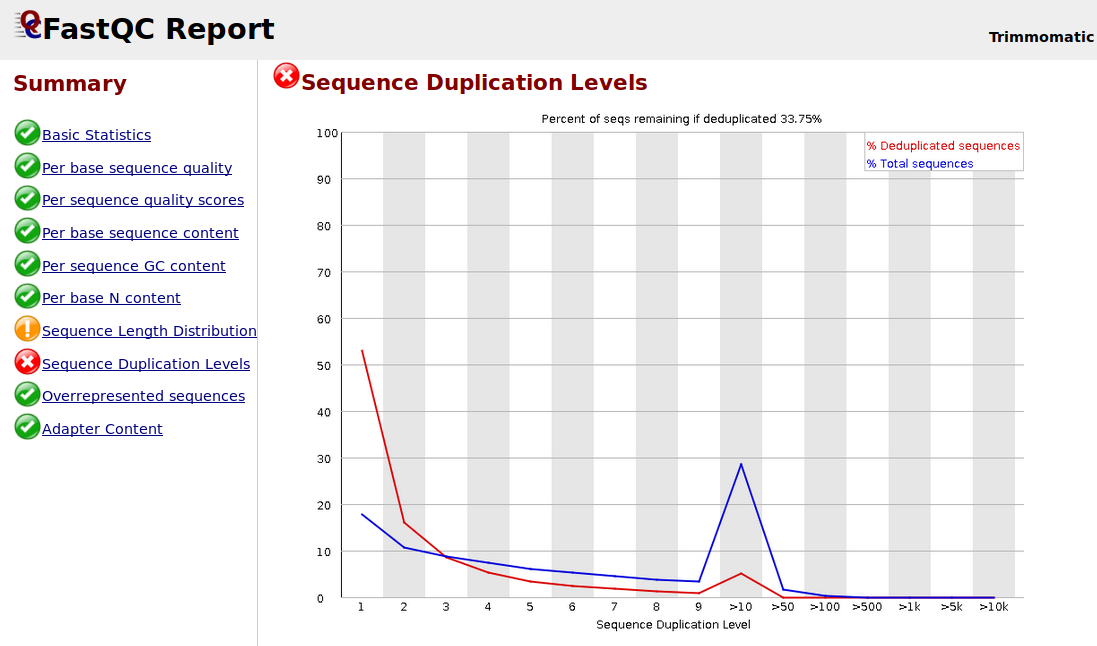 To answer your direct question, there are a few reasons why there might be high levels of sequence duplication. From the FastQC help:

The underlying assumption of this module is of a diverse unenriched library. Any deviation from this assumption will naturally generate duplicates and can lead to warnings or errors from this module.

But I think it's also important to address how quality control (QC) is run. It can be tempting to run and re-run QC tools like Trimmomatic until all errors go away, but to be blunt these tools cannot think for you. For example, it's possible to get rid of most adapters by aggressively cropping/trimming both ends of each read, but you'll likely throw away a lot of good data that way. You may want to look into Trimmomatic's ILLUMINACLIP operation. It's also may be tempting to crop/trim reads aggressively if there are compositional biases near the beginning or end of the read. In fact, random hexamer priming can cause the Per-base Sequence Content module to fail on almost any RNA-Seq sample. Again, from the FastQC help (emphasis mine):

Libraries produced by priming using random hexamers (including nearly all RNA-Seq libraries) and those which were fragmented using transposases inherit an intrinsic bias in the positions at which reads start. This bias does not concern an absolute sequence, but instead provides enrichement of a number of different K-mers at the 5' end of the reads. Whilst this is a true technical bias, it isn't something which can be corrected by trimming and in most cases doesn't seem to adversely affect the downstream analysis. It will however produce a warning or error in this module.

So in other words, it's best to determine what can cause each FastQC module to fail, investigate whether this is actually a problem for your data set (referring to documentation as needed), and make a deliberate QC plan that addresses the issues that need attention.

FastQC assumes that all samples are for whole genome sequencing and will flag them as failed if they differ too much from that assumption. This will, for example, cause essentially all RNA-seq, ChIP-seq, and ATAC-seq samples to fail in one module or another. This is not any cause for concern and is completely expected. Primarily concern yourself with whether all of your samples are similar in their metrics.

Not the answer you're looking for? Browse other questions tagged illumina data-preprocessing trimming fastqc or ask your own question.

8
How do PCR duplicates arise and why is it important to remove them for NGS analysis?
0
What are the right parameters to trim a small RNA transcriptome with trimmomatic?

7
insert size pre and post trimming
7
What is the correct way to map Hi-C data with bwa mem?
3
Is there a safe catch-all adapter sequence for trimming?
0
What are the right parameters to trim a small RNA transcriptome with trimmomatic?
2
What pitfalls exist with running FastQC on a bam file?
0
How to run trimmomatic in HPC
1
Trimmomatic trims most of the reverse strand
1
how to train a gene dataset with a nearest shrunken centroid classifier?
4
Telling grep to treat N as [ATCG]