How to cluster the human genes by pathways/system-biology/metabolic properties?

I would like to make a chord plot from my data. I have a list of genes that according to my experiments are divided into 64 clusters of enrichment pattern.

I would combine my 64 clusters with a second clustering. A clustering of all the human genes into subgroups of "interacting" genes (e.g. both are pathway, co-expressed) will allow me to combine the two clustering data on a chord plot.

In the analogy of the following graph the continents will be my 64 clusters of the genes and the edges/chords will be assigned based on the biological function clustering. I guess that such a functional clustering can be done ore has been done using platforms such as: KEGG, genescf, or reactome.org. 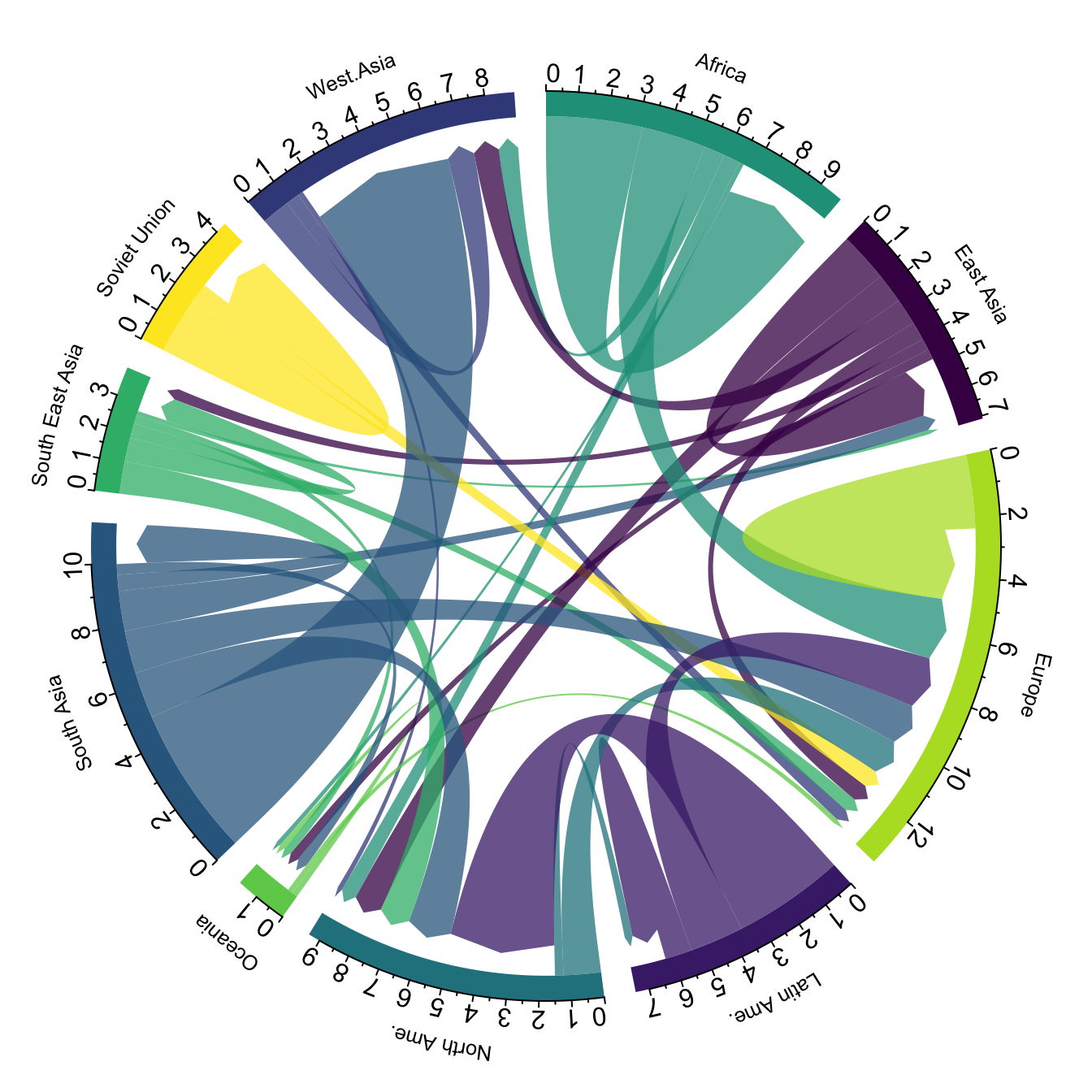 Edit: the question is about getting the clustering from a system-biological perspective not how to plot chord diagrams.

Is there such a metric to quantify how likely two genes are correlated in their enrichment, function etc. For example, using STRING we can see that PIK3CA and PTEN are more co-functioning than PIK3CA and SF3B1. How can I do something like String on genome wide scale. 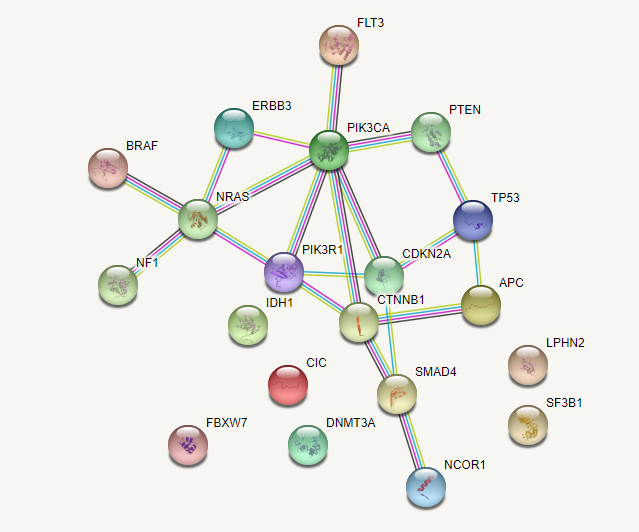 To measure if two genes are functional similar I developed the BioCor package. It calculates a similarity score between genes by the measuring the amount of pathways shared. However, it doesn't take into account the strength of the connection between two proteins. You could multiply the similarity by a value between 0 and 1 according to the number of evidences of the relation between the two proteins.

It is optimized for large amounts of data, you could even perform them in parallel, but I doubt you find information about pathways for most of the genes (In my informal test, I think that I could calculate similarities for about 1600 genes not the ~20000 of the human genome).

When I am interested in co-expression data I calculate the co-expression by correlation and add the similarity of the genes calculated with BioCor. The resulting distance matrix can be used for clustering. Maybe the section about using weighted co-expression network analysis and BioCor can be helpful.

To have a "biological pathway clustering of genes for lymphoblastoid or breast cell lines", you would need to have a specific signature/pathway of the cell lines. Currently I am not aware of accepted standard signature database. The single cell atlas could be useful to find expression of your cells, but I don't know if they provide a signature for cell line

Production of a chord diagram is described in detail here. You use the R package with either,

The first level clusters are predefined and the second layer of clustering is what you need to work out. The obvious stat is correlation, secondly (better approach IMO) you might look at covariance, although I don't exactly know what this "interaction" constitutes, which makes it difficult.

My personal view is the diagramatic representation doesn't really matter, its the robustness of the stats behind the diagram that counts.

I was a bit surprised to learn ggplot2 doesn't do circular diagrams :-(

I think you need to clarify the experiment on these cells lines, I assume its a time course, i.e. time series.

At a guess this is RNA expression, if you are using a chip then its between predetermined genes (i.e. spotted on the chip). If it is RNA seq then it can be anything. I suspect you are treating the cells and monitoring changes in RNA expression as a function of their biological (immunological?) activity. If the basic measure is time, i.e. a time series - thus two genes being expressed in the same unit time the best opening statistic is covariance. If all you want to do is make a chord diagram out of it, I think thats fine, this will form a 2x2 variance matrix for which any standard clustering will work (Jaccard distances [there will be better ones]) or direct plotting from the matrix. If you looking at unique expression behaviour to attempt to unlock some sort of pathway then you are into more serious regression time series (autoregression that sort of thing - this is complicated). If its oscillations then its a separate branch of stats based on sinosoids (sine waves) called periodicity analysis. HOWEVER, if the interaction is genetic similarity (gene families) e.g. mRNA then you want a phylogenetics measure, which if its clustering neighbor-joining is fine.

My personal view if it is the experiment I think, I would,

Not the answer you're looking for? Browse other questions tagged sequencing gene-expression pathway human genetics or ask your own question.

8
How to select the most representative pathways from a gene enrichment analysis?
10
How can I build a protein network pathway from a gene expression quantification file?
8
Comparison of gene set enrichment statistics
3
How to simulate biological pathways?
4
size of the pathways for analysis and filtration
0
I need some tips and suggestions for further analysis of NGS expression data (log2cpm)
2
How to map selected genes to Metabolic pathway Maps