What is the distribution of indel sizes in a healthy human genome? of insertion:deletion ratios?

My understanding is that indels are from 1bp to 10Kb, and a healthy genome has ~400K-500K Indels. Surely most of these are small.

I have not found a definitive reference.

One of the 2015 papers from the 1000 genomes project has a nice figure (figure 1) showing the size distribution of medium to large sized insertions and deletions: 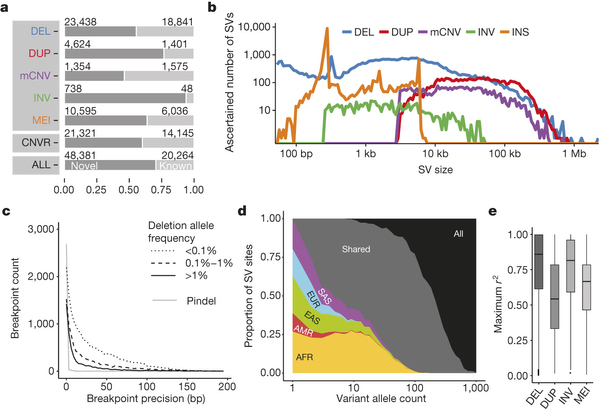 From another 2015 1000 genomes paper, one can see that the absolute number of smaller indels is much larger, though an exact size range isn't given (as far as I saw). If you really want to know that, just download the most recent 1000 genomes VCF file(s) and compute the exact median size and/or distribution that you want.

For indels longer than 50bp, I would highly recommend to read this paper by Chaisson et al. This call set is constructed from the whole-genome assembly of the CHM1 genome. It is far more comprehensive and probably more accurate than all the other call sets. The following is Table 1 from the paper:

I have to say that the high ins-to-del ratio is surprising to me, but this is what the data tells us. I have done a similar analysis and reached a similar ratio.

PS: These numbers are essentially from one haplotype. They will be higher for a diploid sample.

EDIT: some numbers in the original post are wrong.

Not the answer you're looking for? Browse other questions tagged variation indel literature-search or ask your own question.

13
Given a VCF of a human genome, how do I assess the quality against known SNVs?
6
What is indel calling and what is its purpose?
2
remaining human genome variation that hasn't been sequenced?
2
Can I export the SNPs between whole genome alignments using the command line?
3
Merging transcriptomes coming from different experiments
4
Remove variants that do not map to human genome