How can I locate duplicated regions in a sequence?

I am facing an issue when trying to align short reads against a region in human chr5. The two Sensory Motor Neuron genes, (SMN1 and SMN2) are almost 100% identical and this causes the aligner to fail to align reads correctly since each read matches perfectly to two separate regions of the reference, leading to very low alignment scores.

If I BLAT the SMN1 gene's full genomic sequence against the human genome (hg19) on UCSC, I get (only showing the 1st two lines):

And on the browser:

To get around this, I want to mask the SMN2 gene. However, the region of similarity extends beyond the annotated boundaries of the gene, so I would like to identify the full extent of this duplication.

So, given a large nucleotide sequence in fasta format, how can I compare it to itself and identify identical or near identical regions?

GeneBlocks is a Python library for comparing DNA sequences. It can be used to find common blocks (identical regions) in a group of DNA sequences. Using a modified version of your example (I duplicated a small region):

Note that it wasn't designed to plot only one sequence, so as a workaround the sequence is given twice, with different names. As an alternative, you can use one sequence and plot with DNA Features Viewer: 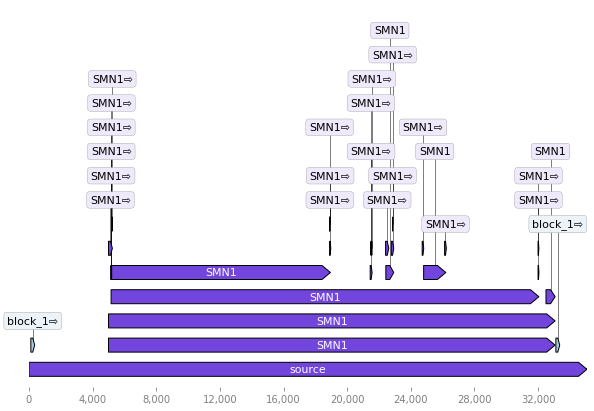 If you know approximately where are the duplicated regions, you can cut them out from the genome and align the two block using tools like MUMmer or Mauve. Although Mauve is not scalable solution (You can not scan genomes for duplicates with it) it's very handy for aligning small(ish) blocks. It can also align multiple sequences if you would like to check some tri/multiplications. 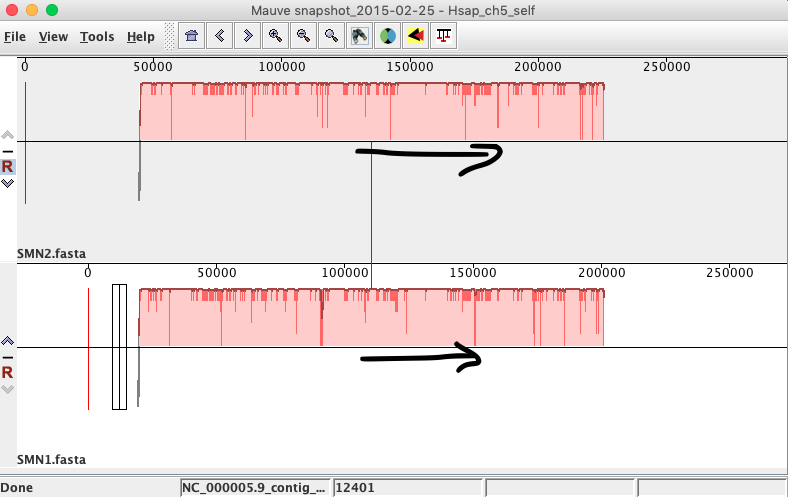 P.S. you can also somehow upload annotations to Mauve, but I was lazy, so I "hand drawn" the arrow where I knew the genes are.

Not the answer you're looking for? Browse other questions tagged fasta genome sequence-analysis sequence-homology duplications or ask your own question.

0
How should I deal with segmental duplications when aligning NGS reads to a reference genome?

7
Finding homologs of a protein sequence
4
Tool to show DNA sequence and allowing upload of own graph data
5
Identifying Indels from Chromatograms
1
How can I find out if my gene of interest is duplicated?
1
How to identify the DNA sequence of a gene in the complete genome sequence FASTA format file?
0
How to know if the DNA sequence has been assembled and why is it important to know how it was assembled?
0
How to Find List of Genomic Coordinates from List of Genes using UCSC Website?