Want to improve this question? Update the question so it focuses on one problem only by editing this post.

This is a follow up question to this post: How can I find out if my gene of interest is duplicated?

Briefly, to identify homologous genes, I performed tBLASTn analyses against my genome of interest using various sequences of a closely related species as queries for the BLAST analyses. Using this method, I found two (and in some cases up to five copies) of my different genes of interest in the target genome. These genes are involved in different organelle functions (i.e., they are not surface antigens) and I want to find out whether these sequences represent duplication events or not. These analyses are being performed on protozoans parasites that belong to the same genus. The query genome is properly annotated, but the target genome is not (it is a whole genome shotgun project that has been assembled at the scaffold level).

Following the advice of @Michael G., I re-analyzed my sequences and blasted them against the entirety of Genbank. If there are two sequences for the same protein (for e.g. protein 3-1 and protein 3-2) and I compare them among themselves they are very similar (over 70% identity at the protein level). When I blast each sequence against the whole protein RefSeq database, the first hit is my query and the rest of the hits correspond to the same protein in other organisms. I believe that these sequences represent duplication events and it is possible that they are paralogues, but more evidence is needed to classify them as such.

However, when there are more than two sequences for the same protein, I found something different. For e.g., say I have three sequences for the same protein: sequence 5-1, sequence 5-2 and sequence 5-3. Sequences 5-2 and 5-3 are very similar (78% identity at the protein level) but when I compare sequences 5-1 and 5-2 I find that they are overlap in the middle, i.e., they are part of the same sequence. Thus, it appears that I don't really have three sequences for this protein but two. Blastp analyses against the whole RefSeq database give the expected result (first hit is my query sequence, the rest of the hits are same sequence in other organisms). So, once again I have what appears to be a duplication event, but in this case one of the sequences appears to be split in two -- could this be because the target genome is not completely assembled? Why could this be happening?

Thank you very much for your help.

Edit: The new results are posted in this thread: Duplicated genes and genome fragmentation - Part 2

The basic result is whether the genes under investigation are:

Point A is compatible with paraology/duplication within the species. Point B infers the duplication is ancient.

The skill/difficulty is building a comprehensive alignment.

The core approach is to blastp your query sequence against the full NBCI database. Blast has an option to automatically download all hits (or all selected hits), e.g. in fasta format. This will provide a multi-species data set to understand the evolution of the protein of interest. This feature of blast is very cool and saves a lot of work. You want to combine the output of point 1 and point 2 in the fasta blastp list and align everything via ClustalO or Muscle (any alignment program). Then manually edit the AA alignment via an alignment editor (I use Seqotron [Mac]) and thereon produce a very basic tree using neighbor-joining just to check everything looks ok. The NCBI blast trick might need a better explanation so let me know if you have trouble figuring this.

If you post the tree as a PHYLOGRAM (I don't need to see the sequence names - just the shape and branch lengths) we can then see whether it looks reasonable before commencing a heavy duty algorhitm to identify support for the competeting hypotheses.

It is not ideal doing this via a message server, but its doable.

The tBlastn looks good and looks like some sort of parology, although the hits you are getting need to be checked to make sure they are not psuedo-genes. The shot-gun genome however appears poorly annotated because it had misannotated 5-1 and 5-2. What I don't understand is why you haven't performed a blast back over the original highly annotated genome? You must have done this?

Many thanks for your response!

What I don't understand is why you haven't performed a blast back over the original highly annotated genome? You must have done this?

Yes, I have performed a blast back over the original highly annotated genome and, as expected, the first hit is the sequence that I used as query in the first blast analysis.

Once again, thank you very much for your help.

So this is what I did to produce the phylogenetic tree: 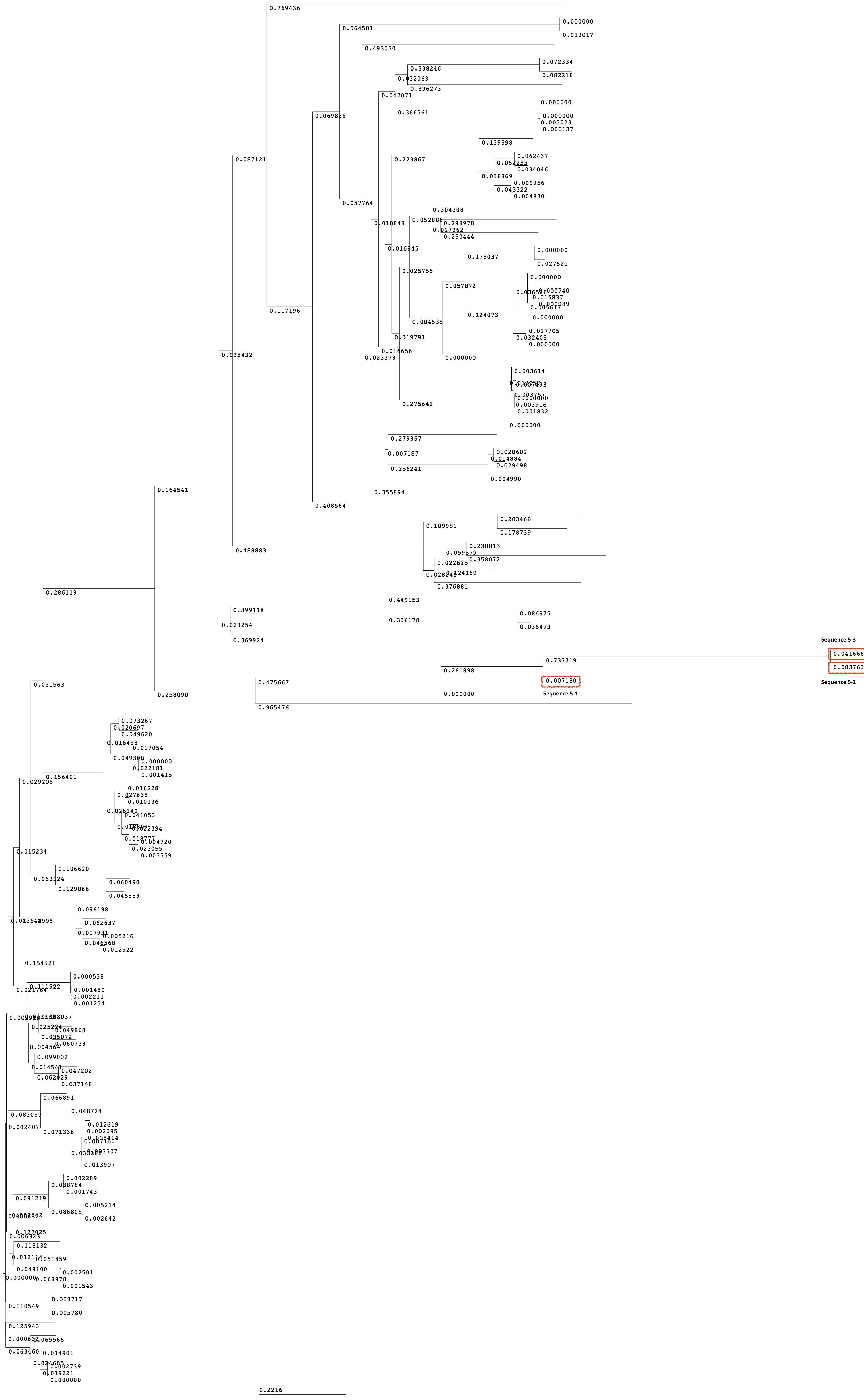 Please let me know if I missed something or if I made a mistake somewhere. Many thanks! -Leah

Long branches are bad news in phylogeny, particularly if artefactual because of a phenomena known as 'long branch attraction'. Don't use your tree to understand duplication until this is resolved etc ... because the results can be distorted by LBA. Thus you must either delete them from the tree or perform a psuedo-annotation and redo the tree.

I was reluctant to forward the idea of phylogeny, because it is not just a bit of coding but an entire dialogue. Anyway by correcting the presumed misannotation you have sufficient results to move the investigation forward. You cant delineate your hypotheses until the root is correctly determined and then you set this as your outgroup under a more robust tree-building algorhithm.

I think we are out of space on this thread (you're allowed 1 post, I'm allowed 2), but clearly things have moved forward. Again, please note once the long-branch is gone you can end up with a different tree.

Not the answer you're looking for? Browse other questions tagged phylogenetics phylogeny duplications or ask your own question.

1
How to make a robust amino acid phylogeny with adequate robustness support
1
How can I find out if my gene of interest is duplicated?

13
What is the best way to account for GC-content shift while constructing nucleotide-based phylogenetic tree?
7
How to isolate genes from whole genomes for phylogenetic tree analysis?
5
How can I locate duplicated regions in a sequence?
1
How can I find out if my gene of interest is duplicated?
1
How to make a robust amino acid phylogeny with adequate robustness support
1
How to define an outgroup to build a robust amino acid tree
2
Detecting whether genome is genetically engineered?
0
How can i get data set of illness and not illness people?