How to quickly determine mutations in a read of a sam file?

After DNA sequencing, I generated a sam file through alignment of a fastq file. Before using well known variant calling programs (eg. Annovar etc.), I want to pick some reads and know what kinds of mutations are there.

Is there any quick way of doing it?

For qualitative analysis, you're probably better off using something less granular like IGV or IGB. However, if you really want to look at a couple of reads:

If you're willing to ignore sequencing errors, you can inspect the CIGAR string or the MD tag, both of which give information on the alignment of a single read.

Most common usage of the CIGAR string uses M (match/mismatch), I (insertion), D (deletion), S (soft clipping), and H (hard clipping). Note that = (match) and X (mismatch) are available as alternatives to the less informative M, but they are less widely used.

The MD tag gives specific details on mismatches and deletions. From the SAMtools tags specification,

Note that neither of these will give you any idea of structural variants in short reads, and neither will be particularly readable (or helpful, due to the higher error rate) in long reads.

I wrote a program, ASCIIGenome, that I find handy in cases where you want to have a quick look at genomic data. It's a genome browser for the command line.

To view only reads containing mismatches you can use the internal function awk. To filter for reads where the NM tag (number of mismatches) is >0:

The view on terminal screen may look something like this: 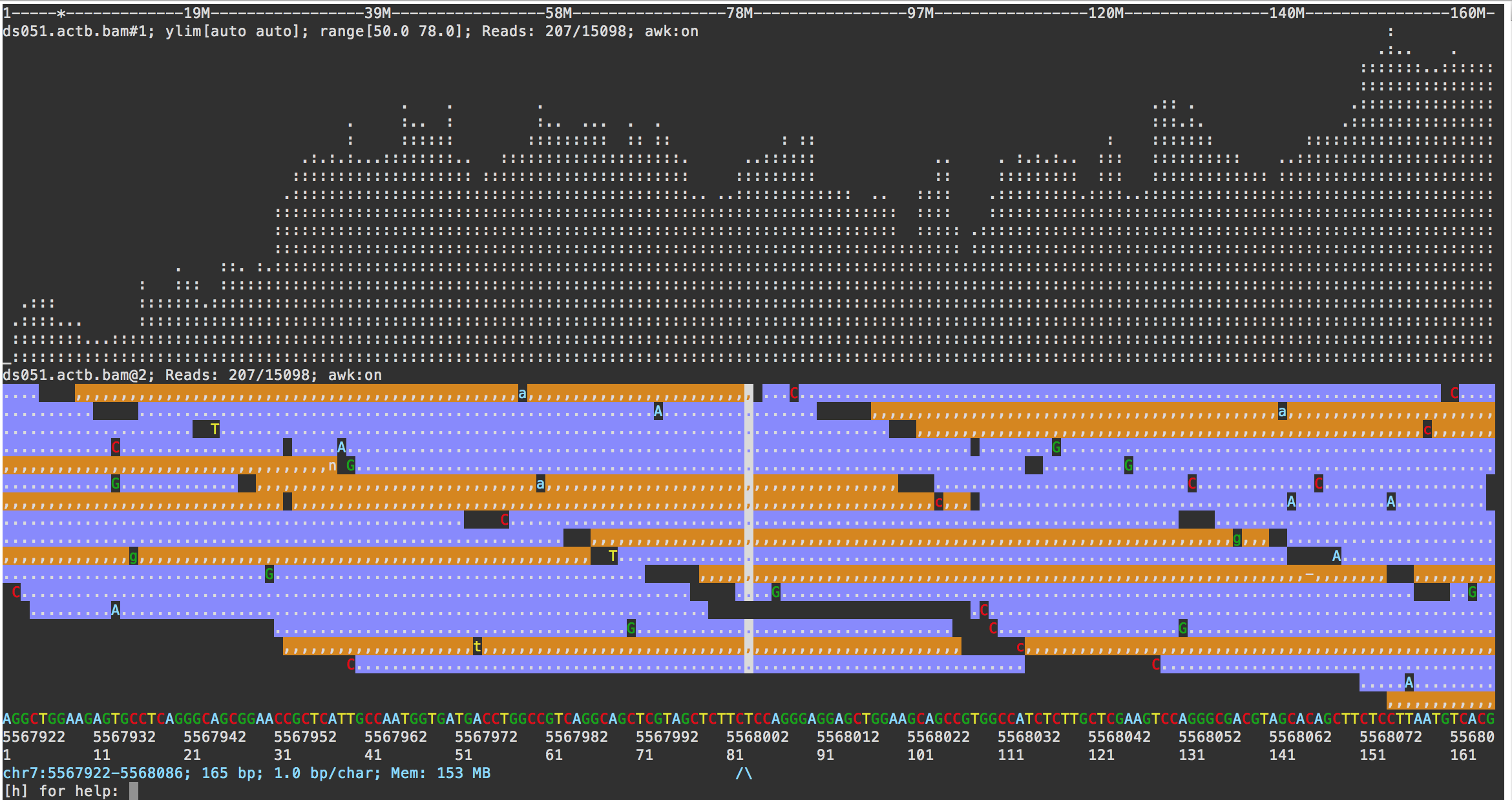 Similarly, to get only reads containing indels you can use awk '$6 ~ "D|I"'

Hope this helps and feel free to report bugs & issues.

samtools mpileup can do this quickly:

This will produce a VCF-formatted file containing information about what variants have been seen in the SAM file, aggregated for all the mapped reads.

16
How can I call structural variants (SVs) from pair-end short read resequencing data?
7
How do I generate a variant list (i.e. VCF file) using Illumina reads from a human genome?
7
How can I count the number of reads that support a variant in a bam file?
11
How to subset samples from a VCF file?
5
No variant found using GATK 4.0 HaplotypeCaller
6
How to correctly call a VCF file using damaged DNA? (IonTorrent & FFPE)
0
How can I extract all known mutations of my BAM (or SNP/INDL files)?
2
Detecting SARS-CoV-2 variants from the mixed virus population
1
How do I call variants using BCFTools without piping mpileup file?
3
Detect mutation context in a read of a sam file