How to identify Father-Daughter Relationship from Phylogenetic analysis?

I have performed a phylogenetic analysis using CLUSTALW and obtained a phylogenetic tree. I know how to read a phylogenetic tree and how to relate the sequence similarity between two sequences by looking at the tree, but what I am concerned about is how one can decipher the father-daughter relationship by looking at the tree? Also, if I want to isolate the sequence of the father corresponding to a daughter sequence how can I do that? I have attached the corresponding image. In the image, I know that sequences "QXN18196" and "QXN18436" are closely related. But will it be safe to say that sequence "QXN18520" is the father sequence for both the sequences? Or if I want to establish a father-daughter relationship for the whole tree, what will be the relation between the sequences? 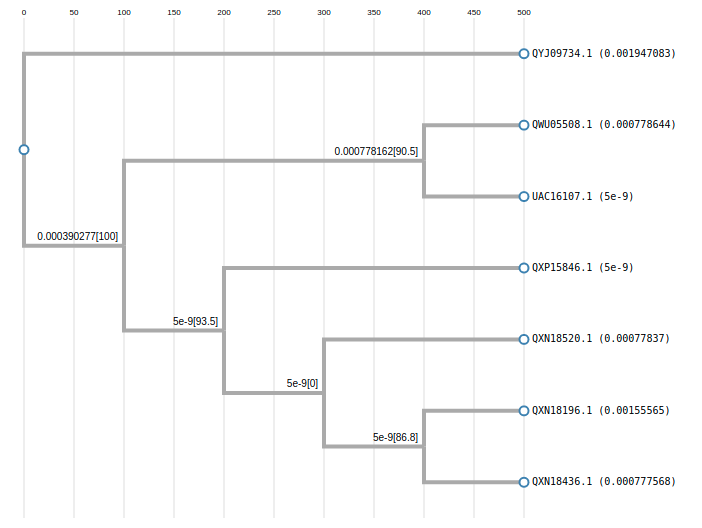 (General observation: Note also that for a number of reasons, phylogenies often don't reflect reality -- they are simply a maximum likelihood estimate of the actual ancestral pedigree, often under some very unrealistic assumptions, and/or according to an incomplete or incorrect view of reality -- e.g. the samples that you have collected may have a lot of allele matches due to identity by state (IBS) rather than identity by descent (IBD). In other words, let phylogenies inform you, but don't assume they are the absolute truth.)

Not the answer you're looking for? Browse other questions tagged phylogenetics or ask your own question.

7
How to isolate genes from whole genomes for phylogenetic tree analysis?
14
Biopython Phylogenetic Tree replace branch tip labels by sequence logos
1
How can I find out if my gene of interest is duplicated?
1
How to define an outgroup to build a robust amino acid tree
2
Constructing a phylogenetic tree for classical MHC genes from different organisms
2
Questions about microbial 16s rRNA phylogenetic, ANI Taxonomy, and GGDC
2
How can I improve or otherwise investigate an unreliable genome tree?